Imhullu (Japanese: マフー Mafu) is a tome introduced in Fire Emblem: Shadow Dragon & the Blade of Light. It is the signature weapon of Gharnef, the Dark Pontifex and ally to Medeus, and its power prevents attacks from any weapon but Starlight.

There are two differing explanations given for Imhullu, one given in Shadow Dragon and a differing one given in New Mystery of the Emblem. The first is that Gotoh was the guardian of the tome, knowing its immense power could be used for evil; his pupil Gharnef took the book and vanished.[1] The other is that Imhullu was first created by Gharnef, the future Dark Pontifex, during his tutelage under the White Sage Gotoh. Out of envy and wrath over Gotoh picking rival student Miloah as the successor of Khadein and the Aura tome, Gharnef used the Darksphere, one of the gems adorning the Binding Shield, to create Imhullu. In the process of creating Imhullu, Gharnef's heart was sealed in the Darksphere, corrupting him.[2]

Much as the effects of the Darksphere itself can only be countered by the Lightsphere, so too does Imhullu have a weakness to Starlight, a tome forged from the Lightsphere. One who wields Starlight can use its power to pierce the dark protection Imhullu bestows upon its wielder. To this end, Gotoh had Marth gather the components to forge Starlight for use against Gharnef himself. 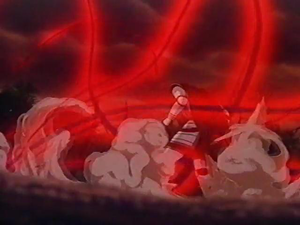 Imhullu bombarding Cornelius in the anime.

In Prince of Aritia, the first episode of Fire Emblem, a flashback shows Gharnef using Imhullu in battle against the Falchion-wielding King Cornelius of Altea, and with it easily kills Cornelius by piercing him through the stomach. The spell is depicted as a large number of glowing dark tendrils, each ending in what looks like a screaming human face, emerging from the Imhullu spellbook, which bombard the target before exploding.