The Holy Kingdom of Archanea (pronounced /⁠ɑɹkəˈneɪə⁠/[key][1]; Japanese: アカネイア聖王国 Holy Kingdom of Akaneia), briefly the Holy Empire of Archanea (Japanese: アカネイア神聖帝国 Holy Empire of Akaneia), was the grandest and most powerful of the Seven Kingdoms of the continent of the same name. It occupied much of the southeastern peninsula of the continent, bordering Aurelis to the north, and neighboring Talys to the east. Through a succession of twenty-four kings, the kingdom held a powerful influence over the affairs of the rest of the land throughout the centuries of its existence. 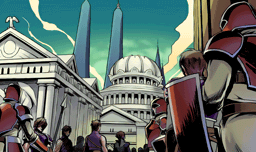 The rise of Archanea finalized the continent's shift into the hands of humanity, many of whom persecuted and abused the manakete survivors of the dragonkin. Five hundred years after its foundation, it was followed by the rise of Medeus and his Dolhr Empire, who engaged Archanea in a war of vengeance which would later be known as the War of Liberation. The Archanea royal family was exterminated save for Princess Artemis, who took refuge in the Altea region. One of the kingdom's dukes, Caldas, had come into possession of the Fire Emblem and rallied a liberation army at the capital along with General Ordwin; their army successfully challenged the forces of Dolhr while Anri, wielder of Falchion, eventually slew Medeus and brought an end to the war. Afterward, Artemis reluctantly married Caldas at the request of the Archanean people, and he became the king. Caldas's younger brother, Marlon, forged the plains north of the country to form the kingdom of Aurelis, a close ally of Archanea. 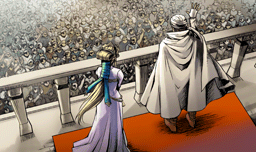 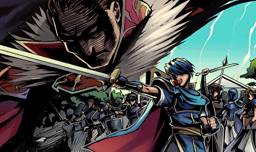 The capital, also known as the palace (Japanese: 王都パレス the royal capital of Palace), is Archanea's capital city whose history goes back six hundred years[4] to the founding of Archanea. It houses Archanea's capital palace and seat of government, nicknamed the Millennium Court or Ageless Palace (Japanese: 千年王宮 Thousand-Year Palace) because of how legend says that it has stood for a millennium.[5]

Knorda (Japanese: ノルダ Norda) is a major market town situated close to Millennium Court, located to its south-east. Its stores stock rare goods,[6] and after Archanea's fall in the War of Shadows, slave traders moved in.

The state of Lefcandith (Japanese: レフカンディ Lefcandy) is primarily comprised of of Lefcandith Valley, the primary road between Aurelis and the Archanean capital region. The route is guarded by countless fortresses. Its last known governor prior to the War of Shadows was Duke Caldas, who was caught in the confusion of the Dolhr invasion and unable to properly contribute to defending Archanea.[7]

The state of Deil (Japanese: ディール Deal) is situated in the south-eastern region of the Archanean coast. Maria of Macedon was held hostage by the forces of Dolhr in Castle Deil during much of the War of Shadows, until Marth freed her at Minerva's request. Its last known governor prior to the War of Shadows was Duke Charon, Midia's father, who died fighting his traitorous peers.[7]

The state of Samsooth (Japanese: サムスーフ Samsooth) is a northern territory which contains the Samsooth Mountains, a feared mountain range also known as the "Ghoul's Teeth" and which is infested by the Soothsire brigand clan. Its last known governor prior to the War of Shadows was Duke Bent, who betrayed the kingdom to Grust's invasion force.[7]

Galder (Japanese: ガルダ Garda) is a small north-eastern port near the Samsooth Mountains, and is the closest port to the Talys islands. Until a pirate crew led by Gomer moved in and claimed it as its own, it was an unremarkable settlement, neither wealthy nor subject to trouble from others.[8]

The state of Menedy (Japanese: メニディ Menedy) is a north-western territory which borders Gra by a series of bridges, on the western side of which lies Fort Menedy. It also houses the Menedy River, which was the site of Gra's betrayal of Altea and the death of King Cornelius.[9] Its last known governor prior to the War of Shadows was Duke Noah, Jeorge's father, who died fighting his traitorous peers.[7] According to Jeorge, the Menedy family was not a particularly powerful one, but won its significant influence in the kingdom through its nobles being talented at scheming, manipulating others, and possessing a knack for foresight for the outcomes of conflicts.[10]

Port Warren (Japanese: 港町ワーレン Port Town Warren) is a harbor town on the eastern coast of Archanea, to the north-east of Castle Deil. Under Dolhr occupation during the War of Shadows, its citizens paid high taxes to Dolhr in order to keep their freedom. Warren is self-governing.[11]

The state of Adria (Japanese: アドリア Adria) is a central territory known mainly for Adria Pass, a major path to the capital through the territory's central mountain range. Prior to the War of Shadows, it was governed by Duke Lang, who betrayed Archanea but nonetheless survived to enter Emperor Hardin's service prior to the War of Heroes.[7]

According to Masahiro Sakurai, a stage called the Kingdom of Archanea was planned for Super Smash Bros. Melee; he states that it was intended to feature onagers bombarding the castle, with dragons and Mages also appearing in unstated roles. Although he didn't specify why, Sakurai said that the stage had to be cut during development, and in the finished game its sole surviving remnant is the non-functional unused stage AKANEIA.[12]