Anri (Japanese: アンリ Anri) was the founder of the Kingdom of Altea and the legendary hero who used the divine blade Falchion to slay Medeus at the climax of the War of Liberation.

Anri originated as an unassuming peasant of the remote Altea islands, living with his brother Marcelus. His life changed when he met Artemis, the princess of Archanea in hiding after the domination of her nation by the Dolhr Empire; the two soon fell in love with each other, and Anri came to learn of the wider conflict between Dolhr and the people it oppressed. Under the guidance of Gotoh, Anri travelled to the far northern reaches of Archanea, though Mamorthod and the Flame Barrel, to the Ice Dragon Temple, where he obtained Falchion; his feats were recorded in a literary work known as the Anri Saga (Japanese: アンリ・サーガ Anri Saga).[1]

By the time Anri returned from his journey in the year 498, an uprising of the people of Archanea, under Duke Caldas and the Fire Emblem he bore, had challenged Dolhr head-on with great success, until Medeus himself entered the fray and devastated its numbers. At this moment, Anri himself appeared and challenged the Shadow Dragon, slaying him and ending Dolhr's grasp on the world. Following Medeus's death, in the year 500, Anri founded the Kingdom of Altea in the islands of his homeland, and became its first king; meanwhile, despite her ongoing love for Anri, Artemis married Caldas at the entreaty of the people of Archanea. Anri died unmarried and childless in the year 537; he was succeeded by his brother Marcelus, whose ascension sparked a dispute among the nobility resulting in the foundation of Gra, which would remain a close Altean ally for decades.

Sixty-eight years later, in the War of Shadows and War of Heroes, Anri's descendant Marth would come to repeat the feats of Anri by twice slaying the revived Medeus and in making a journey to the Ice Dragon Temple. The people of Archanea came to regard Marth as a "second coming" of Anri.[2] 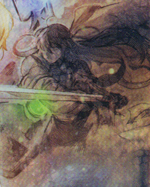 While Anri does not feature as his own card he does make an appearance on Nyna's debut card, B04-048SR. In the background he is depicted fighting a dragon, which may be intended to be Medeus.