Unused content in Fire Emblem: New Mystery of the Emblem

Few pieces of unused content have been found within the game data of Fire Emblem: New Mystery of the Emblem.

During Prologue 7, Katarina asks Kris if there is somebody important in their life; usually Kris responds that person is their liege, but there is an unused dialogue branch where they say that they do not know if there is such a person. Presumably this branch was removed as Kris is to become one of Marth's knights the day after, and it may seem odd if a knight did not consider their liege important to them.

At the end of Prologue 8, there is an unused scene where Norne says goodbye to Kris, like most of their other allies, which means that Norne was at some point intended to be playable in the Prologue.

There are also unused quotes for both Norne and Gotoh:

Although Gotoh retains his NPC role, unused assets indicate he may have been intended to be playable at one point in development, around the time of his appearance in Chapter 14 with stats mostly inferior to his Shadow Dragon stats. 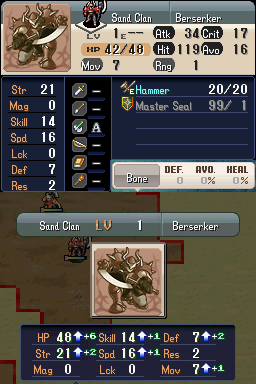 An enemy Barbarian promoting to Berserker.

Despite Barbarian being an enemy exclusive class, an unused playable promotion option is present in the game and can be accessed through hacking promotion of an enemy unit.

By activating the following Action Replay code, the player will be taken to the debug map when they start a new game: