Fire Emblem Engage was first officially announced in the September 13, 2022 Nintendo Direct with a three-minute reveal trailer showcasing various elements of the game and its special edition. The game had previously been the subject of several leaks that revealed information on the game ahead of its official announcement. Following the Nintendo Direct, more information has been released via the official Fire Emblem Twitter account and the game's official websites.

On June 13, 2022, some information on a new game in the Fire Emblem series was leaked on the video game forum Famiboards by Famiboards member Emily Rogers. Emily revealed that the game would be entirely new and not a remake; furthermore, it would be co-developed by Intelligent Systems, Koei Temco and Gust (a subsidiary of Koei Temco), with Gust assisting with the game's visuals.[1] The game was meant to coincide with the Fire Emblem franchise's 30th anniversary and it had already been completed for a year.[1] Emily additionally revealed that the protagonist would have a "strange" combination of red and blue hair, and his mother would be a dragon.[1] Finally, there would be an "Emblems" mechanic that would allow players to summon Fire Emblem characters from previous games in the series.[1]

On June 14, 2022, the day after the Emily Rogers leaks were posted and subsequently spread on various websites, Reddit user u/miasmadelta created a post on the r/fireemblem subreddit claiming to have more information on the game discussed in the leaks. u/miasmadelta corroborated the information given in the Emily Rogers leaks and additionally claimed that several aspects of the game were reused from the cancelled Fire Emblem Wii and that there would be many original characters in the game, stating "people are overreacting a bit about the summoning with thinking of this as a full-blown FEH-style game".[2] u/miasmadelta also shared several development images of the game; the text in the images are all in traditional Chinese, implying that they originated from the localization process.[2]

The images consist of, in order:[3] 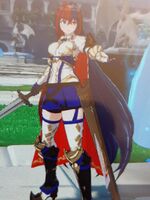 The screenshot that was leaked in the Rønin leaks.

On June 15, 2022, new information about the game was revealed by Discord user Rønin in the games channel of the Discord server of the r/anime subreddit. The info has since been deleted from the server; the following is a timeline of the messages posted by Rønin, created by Reddit user u/Is_J_a_Name in a post discussing the Rønin leaks in the r/fireemblem subreddit:[4][5]

At 5:20 PM EST, the image to the right was shared by Rønin on the r/anime Discord server.

At 6:06 PM, Rønin replied "isn't it public" to someone asking for the source of the leaked image.

At 6:08 PM, Rønin claimed that a friend of theirs sent the image to them earlier. 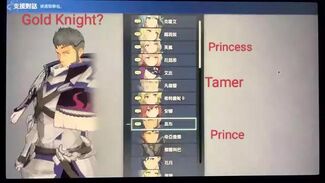 At 7:22 PM, Rønin then posted the following message, which was accompanied by the image to the right:

At 8:58 PM, Rønin posted the following message in response to a comment on avatar costumization:

Thumbnail for the reveal trailer.

Fire Emblem Engage was officially revealed in the Nintendo Direct on September 13, 2022 with a trailer.[6] The trailer featured interspersed clips of gameplay with footage of pre-rendered cutscenes; revealed in the trailer was the protagonist Alear (sporting red-and-blue hair) and the existence of Emblems, a mechanic that allows players to equip and bond with characters from past Fire Emblem games.[6] Additionally, an exploration mode was also featured, and one of the locations showcased was a lobby very similar, if not identical to the one shown in the u/miasmadelta leaks.[6]

A list of promotional trailers and videos are provided below in chronological order.