Numerous pieces of unused content have been found within the game data of Fire Emblem Echoes: Shadows of Valentia.[1]

There are several text strings and even whole files left over from Fire Emblem Fates because Shadows of Valentia is built from the same engine as Fates. Most of the text is pretty standard fare though.

A generic name string consisting of 3 question marks is present. The most interesting fact about the entry is the name, which correlates the string with the entry used for the Hooded Man during his appearance as a boss in Chapter 5 of Fire Emblem Fates.

Name strings for the 2 unused classes in Fire Emblem Gaiden, Serpent and Naga, are present in the game files; they continue to be unused in Shadows of Valentia.

The text files for European English, Dutch, German, and Italian are present in the North American version's ROM, though these languages cannot be selected in the game.

Lunatic Mode may have been planned, as it is referenced in the menu text; alternatively it could have been leftover text from Fates. While there is no description for Phoenix Mode, there is a toggle in the debug menu, perhaps for game testing.

There may have been additional sub-quests planned. Distant Realm, the final quest, is number 40, despite being less than 40 quests available in the game. Number 1 was related to Ham, 8 was "Kingdom of Dead", 18 was "Get me out of here!", 34 was "Beloved Lance" while 37, 38 and 39 simply do not exist.

Many additional Renown bonuses were planned including victory bonus, adversity bonus, turn bonus, skirmish bonus, progression bonus, StreetPass bonus and aggregate turn and flat bonuses for each Act. Each map has a turn count for the turn bonus, but it is always set to 0.

Alcoholic provisions cannot be consumed by anyone in all versions of the game, but it was initially planned for characters over 20 to be able to consume such items. Despite that, all characters have an unseen age stat used to check if they can consume alcohol, rather than a simple "yes/no" flag. In general, only playable characters have ages, but a select few NPCs/enemies also have ages for unknown reasons.

Several unused skills are present in the game's code. While almost all of them work perfectly, Speculum and Counter do not have any visible effects during combat and Wrath is the only one lacking any function, despite its description claiming it increases critical rate when HP is at or below 50%.[2] 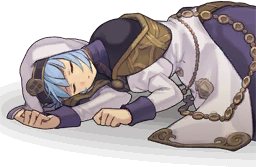 There is also a curious portrait for "Young Grima", which looks identical to a generic Necrodragon.

There is a dialogue portrait for when Silque is sleeping on the ground before Alm speaks to her in Act 1.

There are generic portraits for almost every human class, even though not all of them appear as generic units on the battlefield. Some that do only appear as Specters or Masks and these variants have slightly different (zombified) portraits.

Unused portraits include Villager (both genders), female Paladin, female Gold Knight, Pegasus Knight, Falcon Knight, Cleric, Sage, female Mage and Priestess classes. A couple of these portraits show up during village/base conversations, but not the full-size battle ones. The saint class is an exception as it has a village portrait, but not a battle one (although it does have a spectral version). The Fighter and Hero classes have placeholders portraits of Rinea instead of generic portraits.

Many characters who appear in dialogue or battle also have a matching full-portrait artwork intented to be used when exploring villages and buildings.

Every human class in the game features Illusion and Death Mask map sprite variants. Unused ones are most likely simply fail-safes in case a developer ever wanted to quickly add an Illusion or Death Mask version to a map. The amiibo characters also have non-Illusion versions of their map sprites.

Berkut and Fernand have almost full playable character data, despite being unplayable in the main story, including unique battle, eating, level up, death/retreat and post-battle mourning quotes, all of which are fully voiced in Japanese and English[3][4] but lacks playable growth rates, character endings and preferences for provisions. While Fernand is playable in the Rise of the Deliverance DLC, he cannot level up and his mourning quotes cannot trigger.

What may have happened is that the pair were intended to be playable early on, but the developers eventually decided against it. This is implied by Fernand's character labels being marked as "Enemy Fernand", suggesting a playable Fernand once existed. Besides Fernand, the enemy versions of Deen, Sonia, Delthea, and Zeke are explicitly labelled in a similar manner. Other enemies in the game do not have "enemy" in their label, since it is redundant. This includes Berkut, which could mean he was chosen to be an enemy before Fernand.

Despite being replaced by Berkut at Rigel's Border during Act 4, Shizas's unit data still remains for the most part, as a Level 1 Gold Knight with the exact stats as in Gaiden. However, he does not have a name, portrait or animations so he would not be able to appear in-game properly.[5]

Some classes have unused growth rates due to no units capable of benefitting it.