Midia (Japanese: ミディア Midia) is an esteemed knight of the Holy Kingdom of Archanea and the lover of fellow Archanean knight Astram. She was the leader of the retinue of knights who assisted in Princess Nyna's doomed escape atttempt from Pales at the onset of the War of Shadows, as a result, she was captured and imprisoned, until Nyna returned with Marth's forces to reclaim Pales. After the war, she continued her service to Archanea and became the captain of the Archanean knights. Late in the War of Heroes, she led a knight rebellion against the despotic rule of Archanea's Emperor Hardin. 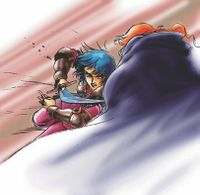 Midia is the daughter of either a certain Count Owen, former Supreme Commander of Archanea,[1] or a Duke Charon of Deil.[2] Her parents were killed by General Camus of Grust during the War of Shadows.[3]

When the army of Dolhr came to lay siege to Pales at the onset of the War of Shadows, Midia was the leader of the band of knights consisting of Macellan, Dolph, Tomas and convened by Boah to lead Princess Nyna to safety. However, the group was cornered by Dolhr's forces and was forced to try and fight its way out.[4] In the end, the group were cornered in a room of the palace and handed over to Camus upon his arrival; as he entered, Midia attempted to strike him down, an assault easily neutralised by Camus, who criticised her for the "cowardly" surprise attack upon him.[5] She and her band were imprisoned in the palace, now under the occupation of Volzhin and Dolhr, where they remained for three years.[4]

During Marth and the Archanean League's assault on the palace and its Dolhr occupation, Midia and the other prisoners were nearly executed by the occupying Dolhr forces, but were eventually freed and joined the League.[6] During the battle at Fort Menedy, Midia reunited with her lover Astram, who had been forced into the service of Grust since Archanea's downfall, and convinced him to rejoin the Archanea forces.[7] Following the end of the War of Shadows, Midia remained with the Archanean knights at Nyna's request and was later made their captain.[8]

In the closing days of the War of Heroes, as Marth and the Altean League approached Pales, Midia was the leader of a coup of both citizens and knights of the realm against Emperor Hardin, in opposition to his despotic rule and the war against Altea. The coup failed, Midia was arrested, and its participants were slowly executed as the days passed. By the time the Altean League entered the palace, Midia had been brought before Hardin, pleading for him to realise the nature and extent of his atrocities. Not taking any notice of her criticisms, Hardin forced her to sit by his side, under heavy guard, and watch as the Altean army was annihilated. When Marth's forces entered the throne room, Midia's guards attempted to kill her, but she was freed by Marth's army and joined them for the rest of the War of Heroes.[9] After the end of the war, Midia joined the Archanean Rangers and devoted her life to serving the people of the now-unified Archanean Alliance;[10] additionally, it is possible that she eventually married Astram.[11]

Midia is a playable character in Shadow Dragon & the Blade of Light. She is rescued from Dolhrian capture in the Archanean Palace by Marth and his army.

Midia is a playable character in Book 1 of Mystery of the Emblem, reprising her role from Shadow Dragon & the Blade of Light.

Midia is a playable character in Book 2 of Mystery of the Emblem; when she initially joins, she is unable to perform any actions due to lacking any weapons and having two enemy units stand right next to her. None of the enemies are hostile to Midia until a player unit reaches the throne room.

Midia is a playable character in the first chapter of Archanea Saga.

Midia is a prepromoted paladin who starts with a decent C rank in lances, allowing her to wield a Killer Lance and a Ridersbane at base. Sadly, Midia's low bases greatly hold her back in the higher difficulties. It will be difficult for her to get EXP at first, since her combat will be mediocre, and training her will not make her better than other units competing with her, because her growths are not outstanding. By the time she joins the army, the player will already have been using other units with a C rank in lances, so even that utility for Midia is limited. Even in low difficulties, a base-level Midia is unable to double most enemies and does not deal much damage because of her mediocre Strength. She can only do decent combat while using effective weaponry, which greatly limits her usefulness.

The mere fact that Midia can use effective lances at base is her saving grace. It prevents her from being a useless unit, because she can deal significant damage to or one-shot enemies such as Cavaliers. Reclassing her to a Dracoknight can also make her more helpful, since she will retain her lance rank and gain the ability to move around the map more freely. However, doing that will prevent another unit with better bases and/or long-term prospects from becoming a Dracoknight, since class slots are limited.

Midia needs plenty of favoritism to remain decent. Since her bases are not very good, and her long-term prospects do not compare to other lance-using units such as Abel or Hardin, she is a very mediocre unit. She also suffers from having an availability gap—she joins the army around the halfway point of the game. Overall, while Midia is situationally useful, she is unlikely to ever be impressive and is typically benched in favor of stronger units with better combat, utility, or both.

Midia is a playable character in New Mystery of the Emblem, reprising her role in Book 2 of Mystery of the Emblem; when she initially joins, she is unable to perform any actions due to lacking any weapons and having two enemy units stand right next to her. None of the enemies are hostile to Midia until a player unit reaches the throne room.

Midia is a prideful knight devoted to serve her country above anything else, ready to sacrifice herself in order to protect her queen.[12] However, her loyalty doesn't blind her to her nation's shortcomings, as shown she opposed Emperor Hardin's tyrannical rule and lead a rebellion to overthrow him; this is in contrast with her lover Astram, who remained loyal to Archanea in spite of Hardin's rule. She is prone to creating rash and impulsive decisions, such as attempting to fight back against the Dolhr army attacking Pales even when her odds of winning were exceedingly slim.

Midia loves Astram and vice versa. Although their relationship started off very rough, the two were eventually able to blossom their relationship into both mutual respect and love.[13] It is implied that the duo were able to tie the knot after the War of Heroes.[11] She additionally bears a strong hatred towards General Camus of Grust for killing her parents in the War of Shadows, and as such attempted to perform a sneak attack on him when he was unarmed, an act which disgusted Camus.

In contrast to her accomplishments as a knight of Archanea, Midia also enjoys a life at court dressed in finery.[14]

Archanea knight Midia
She joined the Archanea Free Knights, to serve her people.

Midia - His Anchor
Midia honored her princess's request to remain with the Archanean Knights, and later became their captain.

Midia - His Anchor
Midia joined the Archanean Rangers, devoting her life to serve her people. Never did she lose her sense of justice.

Midia is featured on one card in Fire Emblem Cipher.