Lianna (Japanese: リアン Lian) is a character originating from Fire Emblem Warriors and the princess of Aytolis. She is one of the kingdom's royal twins, being slightly older than her brother Rowan and the less reckless of the two.

Upon starting the game the player chooses which of the twins to make their main character. For the first five chapters of the game the chosen twin is force-deployed and the unchosen twin is an assisting NPC. The choice has no long term ramifications past the initial few chapters where both can be freely chosen by the player. 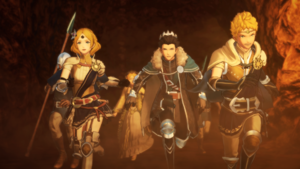 Lianna first appears with Rowan at the start of the game arguing about who is going to take the Aytolisian throne; to Yelena's disappointment. The argument abruptly ends when a soldier walks in and announces that Darios, a friend of the twins, has arrived at the castle. Rowan runs off to meet him with Lianna protesting that Darios had promised to study with her, not spar with him. During the sparring rounds the castle is invaded by mysterious forces, the three are forced to leave Yelena behind but they are able to take the Shield of Flames with them. Yelena tells them to go to the temple as they escape.

Lianna appears in basically every story dialogue scene in the game with her brother Rowan. After convincing the Shepherds to join them and obtaining the first Gleamstone from Chrom, Lianna attempts to contact the Nohrian army while Rowan attempts to contact the clashing Hoshidan army; each army thinks that the other has kidnapped Corrin. Lianna meets up with a lost Elise and offers to help her find her siblings. The two attempt to convince the Nohrians that they are allies and simply want to return Elise to their care, but Camilla, Leo, and Xander all have to be fought before they bother listening to any conversation. She then reunites with Rowan, who had to do the same thing with Sakura and the Hoshidan siblings. After reuniting they locate Corrin, brainwashed by Iago, and free her, Xander, and Ryoma, by defeating Iago. The Gleamstones from Xander, Ryoma, and Corrin are also obtained. 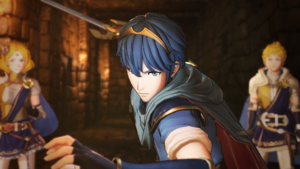 Marth assists the twins in taking the Fortified Citadel.

Having gathered their forces, Lianna and Rowan make their way towards Gristonne's Fortified Citadel and fail to take it, having to leave Darios behind in enemy hands. As they retreat they are assisted by Marth, Caeda and Tiki. Lianna and Rowan head for the World Tree to obtain the Divine Dragon's power, the swords Facinna and Enliron. The group returns to the Fortified Citadel, rescue Darios, and complete the Shield of Flames with Marth's Gleamstone. Unfortunately, Darios, now possessed by Velezark, steals the shield and returns to the Aytolis capital to sacrifice Yelena in a ritual.

Lianna and Rowan defeat Darios and rescue Yelena, but they are unable to prevent Velezark from being revived. Velezark then leaves Aytolis, making his way to the World Tree to destroy it. Lianna and Rowan chase after him and defeat him at the World Tree. The heroes are returned to their worlds and Lianna and Rowan return to Aytolis with Yelena. They both opt to take the crown, both becoming the rulers of Aytolis.

Like her brother, she is disinterested in ruling Aytolis when she becomes of age. She encourages Rowan to become king instead, while at the same time her brother insists she become ruler, putting the two at an impasse.[2] Lianna's reluctance to assume the throne stems from a lack of self-confidence and a belief that she would make a poor ruler.

Lianna is featured on three cards in Fire Emblem Cipher.