Clair (Japanese: クレア Clea) is a Pegasus Knight in the service of the kingdom of Zofia, a member of the resistance army against General Desaix, and the sister of former resistance leader Clive.

Clair had been captured by Desaix's forces and imprisoned in the Southern Outpost. She was released when Alm's band stormed the fortress, and she subsequently joined Alm's army.

Clair is playable as a SpotPass character, released in the Gaiden character set. Along with Innes of The Sacred Stones and Ayra of Genealogy of the Holy War, Clair was one of the first three characters to be revealed to a "returning character" on March 14th, 2012, in a video released by Nintendo on the Wii's Nintendo Channel service which which they later also placed on the official Japanese website for Awakening. This video confirmed the game's use of SpotPass functionality to deliver bonus playable characters returning from earlier games in the Fire Emblem series.[2]

Additionally, Clair appears as an enemy unit in the DLC chapter Lost Bloodlines 2.

Like all female bonus units in Awakening, Clair has access to all base class and advanced class skills available to standard female units.

Clair reprises her role in the remake. Her role has been expanded greatly and has gained more dialogue.

Clair serves as the only Pegasus Knight on Alm's route, unless Faye was made into one. This makes her a very valuable unit, having the best mobility of the entire army. Since she can fly over walls, she's very good at reaching far areas quickly, like with the locked doors at Zofia's Gate. Sadly because of the design of the maps in Alm's route there aren't that many obstacles and terrain to fly over and often that terrain can be passed by the use of Silque's warp, making flying largely superfluous.

She joins at Level 1 with low HP, Skill, and Defense, making her initially very frail. Her high Resistance won't matter for a while, as there is only a single Arcanist in all of Act 1, but will be appreciated further down the line. On a more positive note, her Attack isn't bad and her Speed is high, guaranteeing her to double every enemy of Act 1, while also dealing decent damage. Due to her stat spread, she's a good candidate for the Ridersbane, since its weight likely won't be enough to prevent her from doubling, especially since her Speed growth is 70%. The increased damage output will be welcome as it could take a while for her Attack to reach good levels, though keep in mind her low bulk to not expose her to too many enemies. Once she promotes into a Falcon Knight, she obtains bonus damage against Terrors, though they are scarce in Alm's route.

At all times, keep her away from arrows, and, until she promotes, away from strong physical fighters, as her paper-thin HP and Defense won't allow her to come out unscathed, and her middling growths of 35% and 30% respectively won't do her any favors. Despite her weaknesses, Clair makes for a good unit in the long run, thanks to her high Movement and Speed, and good offensive growths. However it often might not be worth it for dealing with her quite mediocre start and her role as a ridersbane user and counter to terrors can be fulfilled by other characters in better ways such as Clive or Mathilda.

Clair is one of the characters added to the game in the World of Shadows update, and became available for summoning by players on April 14, 2017. Only one variation of Clair is currently available in Heroes, based on her Echoes: Shadows of Valentia incarnation.

Clair is a cultured and refined individual who prides herself on being a noble. She is confident and playful, loving to flaunt her language and spend time in high society. Clair dislikes people who mistreat her, preferring to be treated with dignity, which she believes she deserves.

At least some of what Clair says is an act to seem more appealing. In her support conversations with Alm, she expands her vocabulary to appeal to him after being complimented on her speech patterns.[3] This shows that some of Clair's personality traits and behaviors exist because other people expect them. She wants to appeal to others and be liked, but she also wants respect.

Clair is proud and can be disrespectful toward people she thinks are beneath her status.[4] In her support conversations with Gray, she initially considers him inferior to Alm and rebukes his attempts at flirting without a second thought. She chastises him for thinking she would be easy to swoon and complains that he failed to learn more about her before flirting. She then dismisses him and tells him not to speak to her ever again.[5] Clair hates being seen as anything less than a refined and well-adjusted noble, and gets angered when underestimated by others.

Clair is well-intentioned and can be friendly toward others. She adores her brother Clive, and manages to befriend Delthea in their support conversations. She feels guilty about how she treated Gray and addresses it in their A support, where she explains that her lashing-out at him was born from jealousy over Alm's closeness to Celica.[6] Clair can see the good in people when others miss it, such as when she explains Fernand's actions to Alm; while she does not excuse him from responsibility, she understands why he feels and acts the way he does.[7]

Clair wants to be loved and to belong. Many of her actions are motivated by this desire, from how she changes her behavior to appeal to others, to the decisions she has made throughout her life. For instance, she joined the Knights of Zofia because Clive and Fernand did so before her, and she did not want to be excluded.[8] She also wants to be a good noble, not a discriminating individual who only cares about the high society, despite her outward presentation as such. She firmly separates herself from the classist views of people like Fernand, and stays with Clive when others abandon him.

If Gray survived
She gave into Gray's persistence and reluctantly got together with him. "Awww, it was Alm who I really liked..."

If Gray died
"Oh, Gray. To tell the truth, I was going to let you win..." Alone, she lived on in regret for the late Gray.

If Gray survived
As a knight of the One Kingdom, Clair worked hard on behalf of the continent. In time, Gray's tenacity won her over, and she became his wife and then a mother. But Clair never stayed grounded—she and her pegasus continued to race across the sky, gawkers be damned.

If Gray died
Gray's death left Clair feeling betrayed and alone, but she joined the knights of the One Kingdom and contributed greatly to their growth. The people were enamored with her melancholy beauty, which was a splash of color amidst the mostly dour men of the Brotherhood. 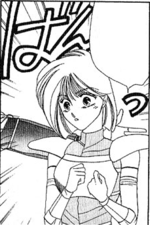 Clair has a minor role in the Gaiden manga, with her most prominent appearance being when she aids Alm in the fight against Desaix to save Mathilda. She is particularly interested in rescuing Mathilda; when Mathilda marries Clive, they will be sister-in-laws. Afterwards she becomes a minor background character appearing in few scenes.

Clair is featured on three cards in Fire Emblem Cipher.