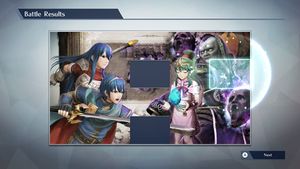 Adding a newly obtained one of Anna's Mementos to an image, represented as the glowing portion.

Anna's Mementos (Japanese: アンナの記憶 Anna's Souvenirs) are collectible items in Fire Emblem Warriors. After completing certain objectives on a map, Anna will appear as an allied unit, but will not move or fight. After pressing the dodge button (B by default) next to her, she gives one of Anna's Mementos, a piece of an illustration used to unlock a History Mode mission. Mementos also level up the Temple, unlocking more blessings.

Note: The second objective is unlocked after completing the story once, and can only be completed on Hard or Lunatic difficulty.

The Path Is Yours

Together to the End

A Brush in the Teeth