August (Japanese: アウグスト August) is a tactician and a former priest of the Church of Edda. Formerly employed by the pirates led by Lifis along Thracia's coast, he entered the service of Prince Leif of Leonster and acted as his tactician throughout his campaign to liberate the Munster District from Grannvale control.

At some point prior to Leif's expedition, August entered the employ of Lewyn, the errant king of Silesse, working to orchestrate the liberation of Jugdral;[1] it was under Lewyn's orders that he sought to act as an advisor to Leif.[2] He joined up with Lifis's pirates as part of his attempts to search for Leif, intending to abandon them once he had found him. He achieved his task during a raid on Iz led by Bucks, which Leif and the Fiana Freeblades repelled; once the pirates were defeated, August approached Leif and volunteered to lead him to Lifis's hideout, then travelled with him to Munster. He parted ways with Leif and the Freeblades at Fort Kelbeth, intending to make his own way to Munster from there, but not before revealing his knowledge of Leif's true identity as Leonster's prince.

Upon learning of Leif's capture by Raydrik, August started working on a plan to rescue him, which proved to be unnecessary as Leif escaped himself with the assistance of the Magi. August rejoined Leif's group and helped direct his escape from Munster, recommending that Leif seek refuge from the Munster pursuit with Thracia's General Hannibal. Upon the formation of Leif's army, comprised of Leonster army refugees, the Magi and the Fiana Freeblades, August continued to serve as Leif's two tacticians alongside Dryas in their journey to reach Tarrah and their subsequent defense of the city from the Friege army.

Following the fall of Tarrah and Leif's escape with Linoan, the army's next destination was Leonster itself, held by Friege. August's recommendation was to travel through the Melfiye forest to get there, citing it as a safer route owing to the lax security its reputation as a dark forest ensures. Under Dryas and August's direction, Leif's army successfully traveled to Leonster and liberated it. In the aftermath of Leonster's liberation, news reached them of the plight of Ulster; both August and Dryas opposed Leif's demands to go to its aid immediately owing to their army's fatigue from the preceding battle, instead proposing to lead a smaller army first with Leif following with the rest of the army the next day. August initially volunteered to lead the first wave, but Dryas requested to do so instead on the grounds of Leif's need for August's support.

Dryas's unit was overwhelmed and slaughtered by the Friege army, and August and Leif were forced to defend Leonster against a Friege onslaught, barely succeeding for six months until Seliph's liberation army arrived from Isaach and launched an assault on Ulster, forcing the Friege army to retreat from Leonster. The Friege army was defeated at Ulster by Seliph before Leif could get there, forcing King Bloom to retreat to Connacht, and at Ulster Leif's next plan of action was determined to be the capture of Munster itself, while Seliph assaulted Connacht. August directed Leif's march on Munster, the crossing of the Great River of Thracia, and the invasion of the Loptrian temple to defeat Veld. Following Veld's defeat, at Leif's request August remained in Leif's employ as a tactician and advisor.[3]

August is a non-playable character, appearing only in cutscenes, but he does have one effect on gameplay. In all chapters in which August is with Leif's party (2x, then the rest of the game from 6 onward), Leif gains an authority star. Leif gains an additional star for when Dryas is also present.

August is one of the characters added to the game in the Evil Ways update, and became available for summoning by players on March 18, 2022. Only one variation of August is currently available in Heroes, based on his Thracia 776 incarnation.

August: Astute Tactician is only available at 5★ rarity.

August is a realist and pragmatist in his approach to tactics and plans. He has no interest in honor or glory, seeks to preserve the lives of Leif's army without wasting lives on frivolous public displays, and is willing to take chances on unconventional or dangerous routes if their risks mean they are less likely to be defended; his approach led him to conflict with Dryas, as his belief that the ideal route to Leonster was through the less defended Melfiye forests contrasted with Dryas's insistence on putting on a show of a march to Leonster by taking the heavily-guarded high road.[4] To this end, he is similarly blunt and tactless in his delivery of plans, cutting straight to the point without dressing it up and harshly responding to interfering possibilities, including the emotions of others.[5] Initially, August was skeptical of Leif's chances at liberating the Munster District, remaining as his advisor solely out of Lewyn's orders; however, in time he came to be inspired by Leif's determination and hope and the subsequent victories, becoming a confident believer in Leif is a leader.[6]

August has an extensive knowledge of torture methods which he taught to Lifis, according to Bucks, who further theorises this to be the reason he was excommunicated from the Church of Bragi.[7] He was nonetheless disgusted by the brutality of Lifis's pirates and worked to restrain their murderous actions as much as possible, mostly unsuccessfully.[8]

August is featured on one card in Fire Emblem Cipher. 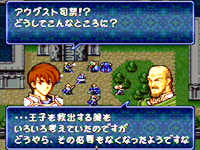