Aytolis (Japanese: アイトリス Aytolis) is the homeland of Lianna and Rowan, appearing in Fire Emblem Warriors.

Aytolis features a somewhat unusual history with its ascensions; it is possible for more than one person to share the power of the crown, though Lianna states it hasn't happened in hundreds of years when discussing it with Ryoma.[1] At the end of Warriors it appears that Lianna and Rowan take this option. After defeating Velezark Yelena crowns both of them in the ruins of the castle. 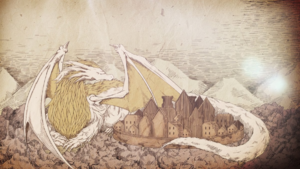 The Divine Dragon and the kingdom.

Long ago the Chaos Dragon, Velezark, attacked a kingdom guarded by a Divine Dragon. While not explicitly stated, Aytolis holds the Shield of Flames the Divine Dragon used to seal away Velezark in one of its major temples, so Aytolis is either the same kingdom the Divine Dragon guarded or heavily descended from it.[2]

According to Darios, Aytolis and Gristonne had negative relations towards each other some time in the past. In the modern day, the two countries have had harmonious relations until Gristonne invaded due to king Oskar's want for power.

During the events of Warriors, Aytolis is invaded and overrun by Outrealm Fiends and Gristonne forces. Much of the kingdom is destroyed by the war, though Lianna and Rowan are eventually able to recover it and defeat Velezark.

The home of Lianna, Rowan, and Yelena. Darios visits the twins often to train and study; during the events of warriors it is overrun by monsters and Gristonne's forces. Oskar, Darios's father and the source of the conflict, tried to use the castle as the site to sacrifice Yelena and revive Velezark.

A city located a short distance southwest of Aytolis Castle. Much of it is reduced to ruins by the invasion though some of it is repaired with Dragon Veins when Lianna and Rowan return to free the city.

A valley with a great Aytolisian temple. Said temple is where the legend of the Shield of Flames has been preserved since the death of the Divine Dragon that protected the realm. Also present is a Dragon's Table-like altar.

A great tree growing from the remains of a Divine Dragon. It is very similar to the Mila Tree appearing on Valentia. It is here that the twin dragon fang swords, Facinna and Enliron, are enshrined.