Darios (Japanese: ダリオス Darios) is a character originating from Fire Emblem Warriors and the prince of Gristonne. He is a friend of Lianna and Rowan, and taught the two of them swordplay. He and the kingdom of Gristonne are allies of the kingdom of Aytolis.

Darios arrives at Aytolis castle to spend time with Lianna and Rowan. He first spars with Rowan, then plans to spar with Lianna. However, the castle is attacked by unknown forces and Darios aids the twins in escaping. Darios is unable to recover Yelena due to a collapsing tunnel.

Darios takes a fairly prominent role in the story onward, appearing as an ally NPC for many battles and providing advice to the twins between battles. Eventually, Darios and the others find out that the attacking forces originate from Gristonne, confusing and upsetting Darios. This causes him to lose trust in his father. 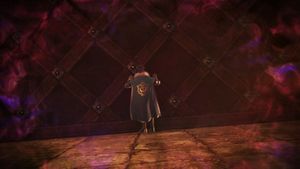 Darios moments before being possessed.

Eventually, Darios tells Rowan and Lianna that they are nearing a hidden Gristonne fortress from an age where Gristonne and Aytolis were unfriendly. They decide to take down the fortress to further their campaign against Gristonne. During the battle Rowan and Lianna give the Shield of Flames to Darios for safekeeping, however, unfortunately, Darios is captured during the battle, and the twins are forced to retreat, leaving Darios behind. A shadowy aura is shown engulfing Darios shortly after his capture.

A while later, Lianna and Rowan, bolstered with new forces and weapons, return to the fortress and rescue Darios. This reunion is short lived, as Darios steals the now-completed Shield of Flame.

Darios then journeys back to Aytolis castle to begin a ritual to sacrifice Yelena and revive the Chaos Dragon Velezark. The twins pursue him and arrive in the throne room, where he and his father Oskar await their arrival. Darios then tells Rowan and Lianna he will spare Yelena if they put down their weapons. The twins comply, and Darios moves to kill Yelena regardless. Before he can land the killing blow, however, Takumi fires at Darios' hand, interrupting him. Lianna and Rowan use the moment to recover their swords and rescue Yelena while their allies cover them. After the opposing factions separate back to opposite sides of the room, Oskar asks how Darios intends to clean of the mess he has made. Darios reassures his father that he has a plan. Darios then turns around and impales Oskar in the gut with his sword, saying he is an acceptable substitute for the sacrifice as his body disintegrates.

The twins then engage the powered-up Darios in battle, eventually defeating him after destroying several assisting dark crystals situated throughout the castle. Darios begs the twins to kill him, which would allow Velezark to remain sealed, however they refuse. Shortly after this Velezark begins manifesting. Rowan and Lianna attempt to aid Darios, but they are separated by a chasm opened by the Chaos Dragon's attacks. Darios is impaled by one of Velezark's attacks and tosses the twins the Shield of Flames before slipping into the chasm. This impalement and fall appear to have proven fatal for Darios, as he makes no further appearances and is mourned by the twins.

Darios is calm and rational, and is able to put the big picture before emotional sentiment. He acts as a mentor and brother-figure to Rowan and Lianna, and teaches them in swordplay. When under the influence of Velezark, Darios becomes extremely arrogant, sadistic, and over-the-top. He claims that he never actually considered the twins his friends, although this statement is muddied by Velezark's hold on him. When Velezark's grip loosens during the battle for Aytolis Castle, he admits that he harbors deeply hidden insecurities about his own strength, and that Velezark preyed upon them in order to possess him.

Darios is featured on two cards in Fire Emblem Cipher.