For the monster weapon from Fire Emblem Fates, see Gauntlet.

Brawling (Japanese: 格闘術 Grappling skill) weapons or gauntlets (Japanese: 籠手 gauntlet), known as arts (Japanese: 体術 martial arts) in Engage, are a weapon type which was introduced in Fire Emblem: Three Houses. They are the weakest weapon type in this game and universally have lower might than their counterparts, but they tend to have good accuracy and are by far the most lightweight weapons. Additionally, every gauntlet acts as a brave weapon, compensating their relatively low might.

In Fire Emblem Engage, rather than using a single stat, arts add the average of the user's Strength and Magic stats to the weapon's Might in order to calculate the unit's physical attack stat.

Gauntlets in the Fire Emblem series by type

These gauntlets inflict magical damage instead of physical.

There are 12 classes specializing in wielding gauntlets. 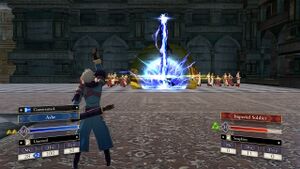 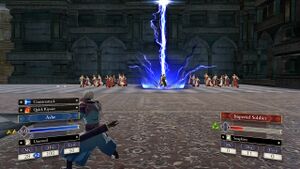