The Disturbance of Bern is a war that occurred in Elibe during the year 1000. The war was was arguably Elibe's largest conflict since the Scouring more than 1000 years prior, involving and taking place in almost every single country and settlement on the continent.

The Disturbance of Bern was instigated by the king of Bern, Zephiel. Zephiel's abusive treatment from his father Desmond during his childhood fueled his hatred for humanity; after his ascension to the throne, he devised a plan to end humanity's grip on Elibe and restore it to the Dragons, leading him to ally with the Fire Dragon Jahn and release Idunn, the very same Demon Dragon used in the Scouring, in order to start a genocidal war that would render humanity extinct.

Zephiel's war was met with much resistance. Among the most notable of the people opposing Bern's attacks was Roy, the son of the Marquess of Pherae, Eliwood. Following the death of the previous leader of the Lycian army, Marquess Hector of Ostia, Roy, with the assistance of Zephiel's half-sister Guinivere, succeeded him and assembled an army consisting of people from all over Elibe. Roy's unified army eventually managed to obtain the eight legendary weapons of Scouring legend and defeat Zephiel, his Wyvern Generals and Idunn, continuing mankind's rule on Elibe.

In ancient Elibe, humanity declared war on all of dragonkind in a war that would later be known as the Scouring. Though dragons were stronger than humans, the humans had an advantage through their sheer numbers. To combat this, the dragons captured the divine dragon Idunn and turned her into a demon dragon and destroyed her soul in order to obey their commands of spawning artificial war dragons. Acknowledging this new power from the dragons, humanity forged the eight legendary weapons, which were wielded by the Eight Legends. With this newfound power, humanity easily slaughtered the dragons. However, once the Legends confronted Idunn inside the Dragon Sanctuary, Hartmut, the leader of the Legends, pitied her and decided to seal her instead of killing her.

Millennia later, The king of Bern, Desmond, was married to Hellene of Etruria as part of an arranged marriage to gain political power, which resulted in a son between the two, Zephiel. However, Desmond held no affection towards Hellene and instead was in love with another woman; their relationship yielded a daughter, Guinivere. Desmond resented Hellene and Zephiel and loved her daughter; Zephiel, for his part, had a strong bond with Guinivere. In time, the people of Bern started to revere Zephiel as the future king of Bern. Desmond, driven by jealously towards Zephiel, had two assassination attempts on Zephiel; in the first attempt, he hired the Black Fang to kill Zephiel during his coming-of-age ceremony, which was foiled by Marquess Eliwood of Pherae, Marquess Hector of Ostia and Lyn. In the second attempt, he tried to personally kill Zephiel by offering him a poisoned drink at a banquet, an offer that Zephiel accepted. Though Zephiel did become seriously ill for several days, he managed to cling on to life and devised a plan alongside his personal bodyguard Murdock to kill Desmond in retaliation. The plan was successful, with Zephiel personally murdering Desmond as a result. These experiences with his father embittered Zephiel, greatly changing his worldview towards mankind for the worse. 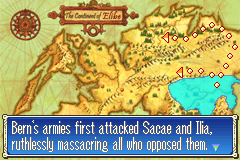 Years later, Zephiel, now the king of Bern and fully convinced of the evil present within humanity, decided to unseal Idunn from the Dragon Sanctuary. This action caught the attention of Jahn, a fire dragon who survived the Scouring. Zephiel formed an alliance with Jahn upon learning of his nature as a dragon. After assembling his army, most notably consisting of his three Wyvern Generals, Murdock, Brunnya and Narcian. Bern's army led a swift and sudden attack on the neighbouring countries of Ilia and Sacae. These ambushes devastated the two countries; many factions allied with Bern, and what little resistance the countries had were either wiped out or forced to retreat to safer territory. Guinivere, who opposed his older brother's actions, took the Fire Emblem, Bern's royal heirloom, and fled Bern to go to Lycia in order to find allies to oppose him, but she was eventually captured by Ruud.

Following these successful attacks, Bern then set its sights on Lycia. The various marquesses of Lycia, recognizing this imminent danger, agreed to hold a war council in Araphen, given its strategic location. One known marquess that didn't attend this meeting was Eliwood, who was suffering from an illness at the time. Instead, Eliwood called his son Roy, who was studying at Ostia with his teacher Cecilia, to lead Pherae's army in his place. Roy immediately began his journey back to Pherae with his vassals; at the same time, Hector's daughter Lilina was paying Eliwood a visit.

Roy returned to Pherae and reunited with his father after a brief skirmish with several bandits; Eliwood gave his son several words of encouragement and revealed he hired a mercenary band to help him; he also advised Lilina to rule Ostia in Hector's absence. While searching for the mercenaries Eliwood hired, a chance encounter with Guinivere's lady-in-waiting Elen led to Roy and the mercenary band, who were led by Dieck, defeating Ruud's troops and rescuing Guinivere. However, this moment of triumph was halted when a messenger announced that the war council in Castle Araphen was attacked by the Wyvern Generals, with most of the marquesses dying in the onslaught. Roy's army hurried to Castle Araphen, killing the castle's appointed guardian Slater in the process. Inside the castle, Roy found Hector, who was severely wounded during the battle. Hector acknowledged that he was not long for this world and revealed that Bern had resurrected dragons to use in the war and that Roy should obtain the legendary weapons in order to combat them; additionally, he implored that Roy succeed him as leader of the Lycian army and that he take care of Lilina in his absence. He then died of his wounds, much to Roy's horror.

Though he was saddened by Hector's death, Roy nonetheless respected his dying wishes and had him and his army return to Ostia to regroup with Lilina. Meanwhile, Lycia was suffering from internal instability after the devastating loss in Araphen; some marquesses, such as Erik of Laus allied with Bern, while others held revolutions in their marches in order to overthrow them, also with the intention of siding with Bern. The most prominent rebellion occurred in Ostia; Legance, a commander in the Ostian army, managed to amass an army of rebels to capture Lilina and take Ostia castle, though he was eventually killed and Lilina was rescued when Roy managed to quash the rebellion after he arrived to Ostia. Though they emerged victorious in the battle Roy recognized that the Lycian army is no match for the full might of Bern's army and decided to collect the legendary weapons before Bern does, with Lilina assisting them in obtaining Durandal. After obtaining Durandal