The mage dragons (Japanese: 魔竜 magic dragon), collectively known as the Basilisk,[1] are one of the dragon tribes of Archanea. This breed of dragon is associated with magical power and is highly resilient against human magic attacks. Certain manaketes can access the form of mage dragons through the use of magestones.

In the Elibe games, this dragon breed is known instead as the demon dragon. Unlike the Archanean mage dragons, which are one of the most common Archanean dragon clans, demon dragons are a one-of-a-kind breed created through the mutation of a divine dragon; its only purpose is to create war dragons to fight humans.

Millennia before the foundation of the Kingdom of Archanea, the dragons were the dominant race of the land, presiding over an enlightened and advanced civilization covering the entire continent. The mage dragons of the Basilisk tribe were part of this civilization. This changed one thousand years before Archanea's formation, as the dragons began to show signs of deterioration. When the divine dragon elders recommended that dragons seal their power into dragonstones and take a human form to ensure their survival, several mage dragons complied and took the form of manaketes. Those who either failed to comply or refused thus degenerated into aggressive wild beasts as predicted.Wild mage dragons are only known to have inhabited the Dragon's Table in Dolhr, and were bewitched into serving Gharnef in opposition to Marth in the War of Heroes. [2] 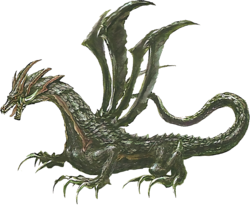 The only known demon dragon was created by the dragonkin during the Scouring. In order to save themselves from crushing defeat by the sheer number of humans, a group of dragons planned to use a divine dragon to create an entity capable of spawning massive numbers of war dragons. Idunn was the subject of this plan, and was abucted and had her soul shattered to transform her into a demon dragon. Even with her ability to spawn war dragons, Idunn and the dragons were defeated, and Idunn was sealed away using the Binding Blade. She spent a thousand years imprisoned until she was freed by Zephiel, who had her resume the creation of war dragons.

Mage dragons are mentioned in the Malig Knight's Japanese flavor text.[3] The English version translated it as "evil dragons".

Mage dragons look similar to ice dragons with their sleek and serpent-like build, though they are not as muscular as ice dragons. Their spine is lined with barbs and they completely lack wings. Their hide is colored a pale purple.

In Elibe, the demon dragon looks similar to Archanean mage dragons, but is much larger and has enormous yet thin, skeletal wings. Its body is covered in a thick layer of spiky scales and its head is horned and has a great scaly crest. While still mostly purple, it also has red patterns running along its length.

In Archanea, mage dragons have both an affinity for and an immense resistance to magical powers, and attack by exhaling arcane breath which acts as magic when it strikes its foe.

In Elibe, the primary ability of demon dragons is the production of war dragons. In addition to this ability they possess immense power and attack by striking with their tails or claws, or by exhaling malevolent breath.

Mage Dragons are, unsurprisingly, effectively the dragon counterpart to Mages and Curates. They are the only dragon class whose attacks are counted as magical damage and they accordingly have by far the highest magic stat of any dragon class. In Shadow Dragon & the Blade of Light, Shadow Dragon, and New Mystery of the Emblem, all Mage Dragons are completely immune to magical damage from enemies, including the attacks of rival Mage Dragons or Magestone users. While they do not have this trait in Mystery of the Emblem, they still have very high resistance, which they also have in other games.

The Demon Dragon's stats in The Binding Blade are significantly different considering that the only Demon Dragon, Idunn, is the game's final boss. It does not share the Archanean Mage Dragon's immunity to magic, and it has very high strength and defense, although this does not stop it from falling relatively easily to the Binding Blade or to Fae's Divinestone. Its weapon is Dark Breath.

In Shadow Dragon and New Mystery of the Emblem, the Mage Dragon class is classified as a special class, and accordingly has a higher level cap of 30.

The stats for Shadow Dragon and New Mystery of the Emblem are used to calculate the stats of a Manakete using a Magestone in combat.

The stats for Shadow Dragon and New Mystery of the Emblem are used to calculate the stats of a Manakete using a Magestone in combat.