This article is about the chapter from The Blazing Blade. For the chapter's titular character, see Durban. For the class, see Berserker.

Athos takes Hector to the location of Armads; he explains that it is guarded by soldiers who fought in the Scouring, and Hector must defeat them to claim Armads.

After proving himself against its defenders, Hector reaches the throne of the shrine, were he encounters the spirit of Durban—one of the Eight Legends. Hector requests Durban's aid; Durban warns that Hector will die in battle if he takes Armads, but Hector takes it anyway.

Hector returns to the rest of the group with Armads. Athos then takes Eliwood to claim Durandal. 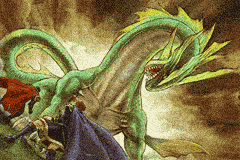 A dragon appears before Eliwood and Hector.

Later, Eliwood exits the shrine with Durandal, prepared to face Nergal. However, an Ice Dragon suddenly appears; Eliwood, guided by Durandal, strikes the dragon down in a single blow. As the dragon dies, Athos notices something is wrong, but is interrupted by Nergal's sudden appearance. Nergal claims Ninian proved to be useless, and puts Nils in a trance to use take him. Eliwood demands to know what Nergal did with Ninian; Nergal states that Eliwood has just killed Ninian, and begins to taunt him for it. Ninian takes her human form once again, and Eliwood rushes to her side. Dying, Ninian tells Eliwood that she is glad he is unharmed, but Eliwood is beside himself with grief and regret. Nergal attempts to depart with Nils, but Athos attacks him with Forblaze. Nergal takes little damage, and boldly proclaims that no legendary weapon can do him harm. Nergal then leaves without Nils, claiming he does so out of respect for the man Athos used to be. Soon after, Nils awakens to see the corpse of his sister, and is himself grief-stricken.

Stats with two figures separated by a ~ are presented as a range, representing stats that vary due to random growths. The figures to the left and right of the ~ are the stat's minimum and maximum possible values respectively.
Main article: Kaim