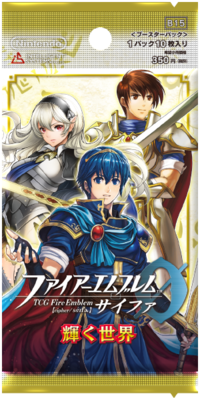 Shining World (Japanese: 輝く世界 Shining World) is the fifteenth booster series released for Fire Emblem Cipher. It primarily features characters from Fire Emblem: New Mystery of the Emblem, Tokyo Mirage Sessions ♯FE, the Conquest campaign of Fire Emblem Fates, and the Jugdral duology. This series was released on December 13, 2018 in Japan. The retail price for individual booster packs is ¥350 plus tax.

This booster series is part of season 4, and will no longer be legal in competitive play sometime in mid-2022.

This booster series can be divided into one half and two quarters. The first half, consisting of cards 1-50, focuses primarily on characters from New Mystery of the Emblem (and, by extension, the game of which it is a remake, Book 2 of Mystery of the Emblem, along with a character originating from Fire Emblem: Archanea Saga) with a few characters from Tokyo Mirage Sessions ♯FE and mostly denoted with

, although card 48 (a depiction of Barry Goodman from Tokyo Mirage Sessions ♯FE) is a colorless card without a continental denotation; the third quarter, consisting of cards 51-75, primarily focuses on characters from Conquest campaign of Fire Emblem Fates and primarily denoted with

, although there are a few cards with a

denotation including dual-alignment cards with both denotations; the fourth quarter, consisting of cards 76-100, primarily focuses on characters from Genealogy of the Holy War and Thracia 776 and denoted with

The series features a total of 100 normal cards, 2 secret cards, as well as 14 alternate foil prints.