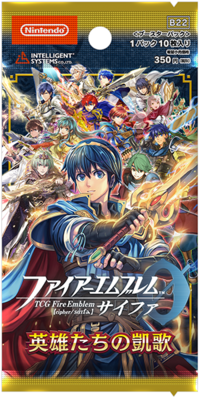 Victory Song of Heroes (Japanese: 英雄たちの凱歌 Victory Song of Heroes) is the twenty-second booster series released for Fire Emblem Cipher. It primarily features characters from all but one game from the greater Fire Emblem series to the point of its release, the exception being Fire Emblem: Archanea Saga, as well as the tie-in manga Hasha no Tsurugi. This series was released on October 1, 2020 in Japan. The retail price for individual booster packs is ¥350 plus tax.

This booster series is part of season 6, and will no longer be legal in competitive play sometime in mid-2024.

This booster series, drawing from most of the greater Fire Emblem series and boasting a size larger than the standard 100 cards, does not feature any standard divisions. All of the continental color denotations introduced to that point are represented, with colorless cards splashed throughout the set.

A more detailed per-symbol breakdown is as follows:

The series features a total of 115 normal cards, as well as 8 alternate foil prints.