The Dark Druid (Japanese: 災いを招く者 Basiliskglance) is an advanced, enemy-only magical class which appears only in Fire Emblem: The Blazing Blade. This class is exclusive to Nergal, the game's main antagonist and final boss, and is a more powerful version of the Druid class available to the player. It has access to all four types of magic, but in gameplay exclusively uses dark magic.

The Dark Druid follows in a similar mold to the Druid itself, boasting fearsome raw magical power, HP, defense and resistance as well as good skill and speed. This class's high stats, combined with the raw power of Nergal's signature tome Ereshkigal, make Nergal a fearsome final boss. The class does have a unique weakness to the Aureola tome, which in the hands of a skilled Bishop is an effective way to fight Nergal. 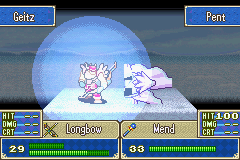 Pent casts Mend after being turned into a Dark Druid through hacking, demonstrating the class's broken staff animation.