In Fire Emblem Awakening, a bonus unit is any playable unit outside of the core 49 units in the game's main story. Bonus units are obtained through the game's connectivity functions, StreetPass, SpotPass and paid downloadable content; the former allows the player to obtain the avatars of other players of Awakening as playable units, while the latter two allow the player to recruit from a vast number of legacy characters from the preceding twelve Fire Emblem series games.

Bonus units serve both a practical use in being able to help bolster a player's ranks if they keep letting normal units die, as with the replacement units of Shadow Dragon and New Mystery of the Emblem, and an aesthetic use in allowing the player to have their Awakening-owning friends and their favorite characters from the rest of the series playable, as a form of fan service. 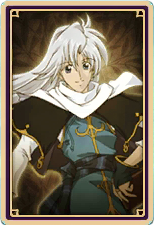 Arthur is a typical example of a legacy bonus unit's portrait.

All bonus units are physically based on avatar builds. While StreetPass bonus units are obviously the avatars of other players, the battle models of the legacy bonus units are instead pre-set loose approximations of the designs of these legacy characters using avatar design components (this is why many SpotPass characters possess designs inexact to their original appearance, as the system often has insufficient pieces to accurately portray them), accompanied by a portrait consisting of their official artwork from their game of origin (or from their DLC package, in the case of most DLC bonus units) mounted on a card background. Additionally, all legacy bonus units are constantly surrounded by a blue aura.

After being recruited, bonus units possess no unique dialogue of their own, instead all sharing the same generic set of level-up, death, shop and event tile quotes, mostly consisting only of ellipses. While StreetPass bonus units retain whichever battle voice choice their creator originally set to them, the SpotPass and DLC bonus units are pre-set to be completely mute (however, a glitch in the NA release gives female legacy characters one of the avatar voices when the game is set to Japanese audio). Similarly, bonus units are incapable of establishing support relationships with anyone, though they can still participate in the Pair Up and Dual systems and will still give and receive a +10 hit rate Dual bonus (or more, if Dual Support+ is used). 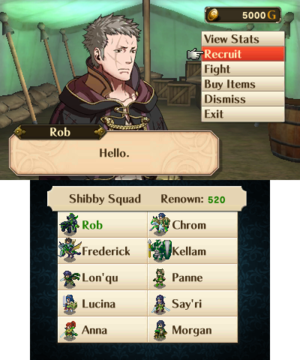 Parleying with Rob, a bonus unit encountered through StreetPass.

When the player receives a StreetPass hit, a bonus unit appears on the world map; here, they lead a team of up to ten units. By parleying with a bonus team on the world map, the player can pay a sum of gold to directly recruit the bonus unit, challenge the team to a skirmish with the reward of recruiting the bonus unit for free, buy items from them, view the team's stats, or dismiss the unit from the map. SpotPass bonus units function in the same way as StreetPass ones, except they do not appear on the world map automatically; instead, they must be manually summoned onto the map through the Bonus Box menu. DLC bonus characters are not handled through this means; instead, at the end of their respective DLC episode, the player is prompted as to whether or not they wish to recruit them.

A save file may only have twenty bonus units recruited at a time; upon attempting to gain any further bonus units, the player will be prompted to dismiss a currently-possessed bonus unit to keep the limit of 20. Additionally, only nine bonus units may be present on the world map at a time (assuming the map is sufficiently large at the time); until room is made on the world map, no further StreetPass hits will summon a team, and SpotPass bonus teams cannot be summoned.

When recruiting a bonus unit (or declining to do so), the unit is saved in the Avatar Logbook, a repository of bonus units shared between all three save files on a single copy of Awakening. The avatar of each save file can also be added to the Logbook for use as a bonus unit in other save files; the player may manually add their avatar at any time once the Logbook becomes available, and it is also automatically added whenever the Endgame is completed. Bonus units saved in the Avatar Logbook can be directly re-hired into any save file for a fee calculated based on their accrued stats and skills. Additionally, saved bonus units and the save file's avatar can have their Logbook entry manually updated to include any changes in class, level, stats or skills.

The Logbook has a maximum capacity of 99 bonus units; units can be deleted from the Logbook at any time.