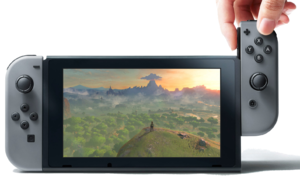 A Nintendo Switch in portable mode, the hand is removing one of the two Joy-Con. The screen features The Legend of Zelda: Breath of the Wild.

It is a portable console with a screen and comes with two detachable controllers. It can also be set into a dock and connected to a TV for use at one's home. Its two included controllers, called "Joy-Con", can be used in a few different ways. The Joy-Con can be attached to the sides of the console to play similarly to the Wii U's tablet, or each Joy-Con can be given to a player to play multiplayer games on the tablet screen. The Joy-Con also connect to a controller attachment for when playing on a TV.