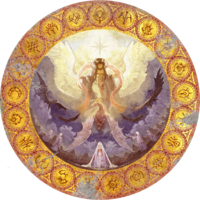 A painting of Sothis surrounded by the crests.

Crests (Japanese: 紋章 Emblem) are tokens of the goddess's power granted to humans on the continent of Fódlan. They are a hereditary aspect and can be passed on to a bearer's child; making it functionally similar to Holy Blood and Dragon Vein manipulative ability. Crests first appeared in Fire Emblem: Three Houses and are held by several characters appearing in that game and its spinoff Fire Emblem Warriors: Three Hopes.

Units in Fire Emblem: Three Houses who possess a Crest have altered capabilities in combat. Each Crest has a random chance of providing a bonus to certain actions. The type of action that will trigger the Crest's effect is always given in the Crest's description.

The following table indicates what crest items are obtained automatically after finishing the indicated route. Other crest items can be bought for 1000 renown each at Byleth's journal. Only one of each can be obtained.

Crest items are available only in a New Game + save file.