Friege (pronounced /⁠ˈfɹi.gə⁠/[key][1]; Japanese: フリージ Freege) is one of the six noble houses of the Kingdom of Grannvale. Its territory occupies the north-western corner of Grannvale, north of Yngvi and Dozel, and west of the capital Belhalla. It was founded in the year 649, shortly after the fall of the Loptrian Empire, by Thrud of the Twelve Crusaders alongside Grannvale itself and its other noble houses; its ruling family are his descendants and possess his holy bloodline, permitting them to wield the holy thunder tome Mjölnir. As with the other duchies, House Friege commands their own elite squadron of knights: the Gelb Ritter thunder mage brigade.

In Grann 757 the Duke of Friege of the time, Reptor, was serving as Grannvale's chancellor, but feared his power in the royal court would be undermined by the rise of Prince Kurth and his advisor, Duke Byron of Chalphy. In response, Reptor formed a power bloc in the royal court in co-operation with Lombard of Dozel in opposition to Kurth's power, and started spreading rumors of the traitorous intent of House Chalphy and its allies. This culminated in the assassination of Kurth by Lombard and the pair's successful framing of Byron and his son Sigurd for the crime, with the support of Arvis of Velthomer. Following this, Reptor was tasked with maintaining public order at the capital Belhalla, and in Grann 760 was deployed to Velthomer Castle as part of the Grannvale defense against Sigurd's army marching back from Silesse to clear his name. Reptor died in this battle at Sigurd's hands, and with him died the power promised to House Friege by Arvis in staging the coup d'etat.

The rule of House Friege was succeeded by Reptor's son Bloom, and with the conquering of almost the entire rest of Jugdral by Grannvale, the governance of three regions was entrusted to the Friege family by the newly-crowned Emperor Arvis: Bloom himself administered the Munster District as its "king", his wife Hilda was appointed "Queen of Miletos", and Agustria was also placed under their rule. The Friege family governed these regions for the following seventeen years, although their approaches differed: while Bloom was highly reluctant to permit the more heinous actions of the Loptr Church in his territory, Hilda revelled in the suffering of the Miletos people. Meanwhile, their daughter Ishtar became betrothed to Arvis's son, Prince Julius, the human vessel of Loptous. Their hold on their territories collapsed in Grann 777 when the liberation army led by Seliph freed both Munster and Miletos from their control, killing Bloom; however, Hilda survived, and she and Ishtar took part in the final confrontation with Seliph's army in Grannvale, in which they both lost and died. 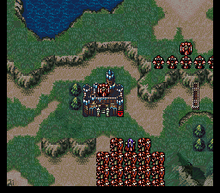 Friege Castle in the Endgame.

Friege Castle is present as a gameplay castle in the Endgame of Fire Emblem: Genealogy of the Holy War. It is the third castle to be confronted in the chapter's course, after Dozel has been seized; its commander Hilda fights in the field when the Friege army is deployed, while Friege Castle itself is guarded by Baran of the Loptr Church.