The Kingdom of Grannvale (Japanese: グランベル王国 Kingdom of Grandbell), known as the Empire of Grannvale (Japanese: グランベル帝国 Empire of Grandbell) during the reign of Arvis, is one of the nations of Jugdral, occupying approximately the center of the continent. It is bordered by Agustria to the northwest, Verdane to the southwest, Miletos to the south, the Munster District to the east and the Aed Desert to the northeast. Grannvale is a kingdom comprised of six satellite duchies surrounding the center of power, the capital Belhalla. 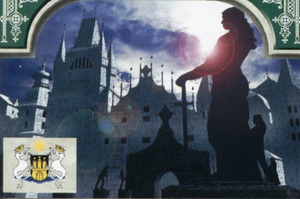 Grannvale itself was founded by Saint Heim of the Twelve Crusaders in Grann 649 following the downfall of the Loptrian Empire, with six other Crusaders – Baldr, Bragi, Ullr, Fjalar, Thrud and Nál – founding its six duchies. The descendants of each Crusader continued to rule their duchies in the following centuries.

In the year 757, Grannvale initiated a war against Isaach in retaliation for a perceived assault by the nation upon the sacred site of Dahna. Grannvale ultimately won the war, but between it and the internal strife it faced with the actions of Sigurd of Chalphy and the machinations of the dukes Reptor and Lombard, it emerged a thoroughly changed nation. The crown prince Kurth was assassinated by Lombard, who framed Sigurd for the crime, and so following the death of King Azmur, the throne was succeeded by Lord Arvis of Velthomer through his marriage to Azmur's newly-rediscovered granddaughter Deirdre.

With the continent unified under his leadership, Arvis reorganized Grannvale into an empire with himself as its first emperor, by popular demand of the people of Grannvale.[1] At first, the Grannvale Empire was a peaceful, if constraining, nation,[2] until rule of Grannvale was seized from Arvis by his son Julius, the human host of Loptous. Julius twisted Grannvale into a malevolent dictatorial force and entrusted the Loptr Church with important roles in its governance, seeking to restore the Loptrian Empire. In response to the tyranny, in Grann 777, Sigurd's son Seliph emerged from exile in Isaach and led a liberation army across Jugdral, culminating in the deaths of Arvis and Julius and the end of the Empire's control of the continent. In the aftermath of the war, Seliph assumed the title of King of Grannvale, as the eldest child of Deirdre.

The capital of Grannvale and its seat of power, for most of its history Belhalla – and in turn, Grannvale – has been ruled by the descendants of Saint Heim. Following the Battle of Belhalla, the throne was ascended by Arvis of Velthomer, who in turn ultimately lost power to his son Julius.

The duchy founded by the Crusader Baldr. The fates of many nations were shaped by the actions of two generations of its lords, Sigurd and Seliph.

The duchy founded by the Crusader Fjalar. Its duke as of the year 757, Arvis, led the rise of the Grannvale Empire and the rebirth of the Loptr Church despite his best intentions.

The duchy founded by the Crusader Ullr. Throughout the decades of conflict, it was plagued by resentment and infighting among its scions, starting with the murder of Lord Ring at the hands of his son Andrey.

The duchy founded by the Crusader Thrud. The schemes of its Duke Reptor served as a partial catalyst for much of the misfortune which befell Jugdral.

The duchy founded by Saint Bragi of the Crusaders.

Grannvale is the subject of the Prologue and Endgame of Fire Emblem: Genealogy of the Holy War. The Prologue is set in the southern region of Grannvale, featuring Chalphy and Yngvi as allied castles, and the Endgame encompasses the entirety of Grannvale save for Yngvi Castle.