The Aed Massacre (Japanese: イードの虐殺 Yied Massacre) was a skirmish between the armies of Leonster and Thracia which occurred in the south-western region of the Aed Desert in Grann 761.[1] In a final battle which broke the long-term tension between the two nations, Thracia's King Travant led an ambush upon Leonster's Prince Quan and his Lanceritter knights, overwhelming and slaughtering them.

Ever since the Thracian Peninsula split into two countries – the Munster District and Thracia – as a result of the actions of the second Thracian king, the two halves of the peninsula were pitted against each other in centuries of a cold war.[2] Thracia sought to reclaim the fertile northern territory for itself, with its own territory highly unsuitable for farming and resulting in an impoverished nation needing to hire itself out for mercenary work to survive. It was never, however, able to succesfully advance on the Munster District because of the Lanceritter, the elite mounted knights of Leonster, proving to be an impenetrable force to the Thracian army. It was under these conditions that Travant came to become the Thracian king, both yearning for reunification for the good of his people and thoroughly despising Leonster and its people.

Leonster's prince, Quan, was a close friend and ally of Sigurd of Chalphy and was married to Sigurd's sister Ethlyn, and so in Grann 757 the two assisted Sigurd in his battles in Verdane and Agustria, and accompanied him in exile to Silesse after Sigurd was framed for the assassination of Grannvale's prince, Kurth. Shortly into their time in Silesse, Quan and Ethlyn departed the country to return to Leonster, intending to raise support for Sigurd's cause and an army to assist him in the conflict against Grannvale. During their time back in Leonster, Ethlyn gave birth to their second child, Leif. 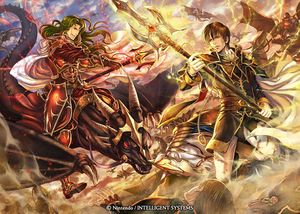 Quan's and Travant's clash, as depicted in Fire Emblem Cipher.

In Grann 761, Quan led a unit of eight Lanceritter knights on the mission to reinforce Sigurd, who was already battling the forces of Grannvale at Lubeck Castle north of the desert. He was accompanied by Ethlyn, who had reluctantly taken with her their eldest child, Altena; neither intended for Ethlyn to remain with the party for long, especially in light of Altena's presence, but Ethlyn wished to remain with Quan for "just a little longer". Meanwhile, Travant had either directly or indirectly learned from Veld of the Loptr Church of the passage of the Lanceritter through the Aed Desert,[3] and so deployed with his lieutenant Magorn and thirteen Wyvern Riders in pursuit of Quan.

As horseback riders, Quan's entire unit struggled to move in the desert, and so panicked upon sighting Travant's forces closing in on them, knowing the ability to put up a fight against flyers was limited under these conditions.[4] With Ethlyn's encouragement, the group attempted to fight off the Thracian army, but was quickly overwhelmed and slain.

Upon the defeat of the Leonster group, one of the Thracian men found Altena near Ethlyn's corpse and handed her over to Travant upon his order. Travant took Altena and the Gáe Bolg with him back to Thracia, leaving his army behind under Magorn's command under orders to fly north and assist with the fight against Sigurd's group, with the hope of winning the sizable bounty placed upon them by Grannvale.[5] The entire Thracian unit was defeated in the fight with Sigurd.

Sigurd received word of Quan and Ethlyn's demise in the southern region of the desert from a village elder of Phinora upon seizing the castle back from Velthomer's army. Later, back in the Munster District, the four kingdoms attempted to prepare for all-out war against Thracia upon receiving news of the Aed Massacre; at the Great River of Thracia, the four marshalled their forces in preparation for the Thracian army under the command of Leonster's King Calf, but were defeated through the betrayal of General Raydrik of Connacht, and the Munster District fell briefly under Thracia's rule. However, Thracia was soon betrayed again by Raydrik and defeated by the Grannvale army, which claimed the Munster District under its own rule and cowed Thracia into an alliance.