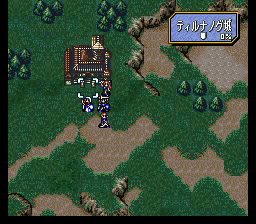 Tirnanog, at the start of Chapter 6 of Genealogy of the Holy War.

Tirnanog (Japanese: ティルナノグ Tilnanogue) is a village located in the north-western reaches of Isaach in Jugdral. Isolated and remote from all other settlements in the country, it is prominent as the birthplace of the revolution against the Grannvale Empire led by Seliph Baldos Chalphy, and was the place where Seliph grew up in hiding from Grannvale following his father's death.

Shortly the year Grann 760, a collection of refugees from the persecution of Sigurd in Grannvale travelled to and settled in Tirnanog; it was Sigurd's assumption that despite Isaach now being under the rule of Danann of Grannvale, his rule would not have spread to the country's furthest reaches yet and thus isolated regions of Isaach would serve as an ideal hiding place for his infant son, Seliph. The journey was led by Oifey and Shannan, taking with them the infants Seliph, Larcei, Scáthach, and Diarmuid;[1][2] at some point after the Battle of Belhalla, they were joined by Edain and her young children, Lana and Lester.[3]

In the following seventeen years, Oifey, Shannan and Edain raised and trained the children, while slowly mustering support for a revolution against Grannvale. In Grann 777, while Oifey and Shannan were on expeditions to neighboring nations for various reasons, Danann learned of Tirnanog's role as the hiding place of Seliph and Shannan's revolution, and ordered a strike against the town while its two adult protectors were absent. In response, Seliph emerged from hiding, and fought and defeated the occupation of Isaach before moving out to formally commence the revolution.

Tirnanog acts as the home "castle" of Chapter 6 of Fire Emblem: Genealogy of the Holy War, and the starting point of Seliph's army.

The arena is not available in this chapter.