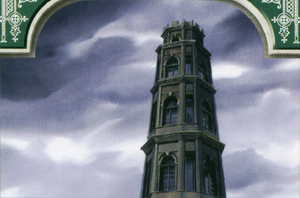 Bragi Tower (Japanese: ブラギの塔 Blagi Tower) is a Jugdrali religious monument associated with the Church of Edda, located on the western peninsula of the Orgahil island, north of Agustria. It was erected by Bragi of the Twelve Crusaders, as a memorial and warning to the future of the perils of prejudice and hatred.

In the aftermath of the Loptrian Empire's downfall, Bragi constructed the Bragi Tower in the site of a former Maerist Loptrian enclave in which he was raised, having found the enclave obliterated by the Empire upon his return. The Bragi Tower was originally intended as a memorial to the Maerists of his youth and a reminder to the world that not all Loptrians were evil.[1] Part of the Bragi Tower's message was to warn against the persecution of Loptrians and other former imperial officials, carved in stone in the altar within the tower, but the carving was later destroyed by someone unknown, and Bragi's message of peace was lost to the world.[2]

As the Church of Edda gained influence and popularity, the Bragi Tower became a frequent destination for pilgrimages for the faithful and wealthy. The popularity led to an extensive pirate occupation of the Orgahil region and Agustrian coastlines, which in turn led to honorable pirate bands, such as the Orgahil Pirates, hiring themselves out as defenders of travelers in the region.[3] One such pilgrimage was undertaken by Duke Ring of Grannvale's House Yngvi and his three children, during which his daughter Brigid was lost in a storm and found and raised by pirates.[4]

At some time after the tower's erection, the Valkyrie Staff was enshrined within it, and the descendants of House Edda had no idea it was there. In Grann 759, the head of House Edda, Father Claud, travelled to the Bragi Tower with Tailtiu in order to pray for insight into the political crisis facing Grannvale. While there, in addition to receiving the answers he sought, he also discovered and obtained the Valkyrie Staff and took it with him to assist Sigurd in Silesse and beyond.

The Bragi Tower is present in Chapter 3 of Fire Emblem: Genealogy of the Holy War, as a landmark with no gameplay role of its own. Tailtiu and Claud appear outside it following the seizure of Sylvale Castle. If Dew waits at its base, he will receive a Wind Sword.