Chalphy (Japanese: シアルフィ Chalphy) is one of the six duchies of the Kingdom of Grannvale. It is situated in the south of the country, to the east of Yngvi and the west of Edda, and is in close proximity to the coast of the Miletos Channel, across which lies Miletos. It was founded in the year 649, shortly after the fall of the Loptrian Empire, by Baldr of the Twelve Crusaders alongside Grannvale itself and its other duchies; its ruling family are his descendants and possess his holy bloodline, permitting them to use the divine blade Tyrfing. As with the other duchies, it had an elite squadron of knights led by the present duke, the Grünritter.

When Grannvale went to war with Isaach in 757, current Duke Byron and the Grünritter departed with the Grannvaleian army, leaving his son Sigurd behind with a scant few knights. Byron acted as the right-hand man to Prince Kurth; but when Kurth was assassinated by Lombard of Dozel, Byron was implicated in the crime and was captured, with the Grünritter wiped out in the process. Meanwhile, after responding to an invasion threat from Verdane, Sigurd spent a year preventing an Agustrian uprising before being himself implicated in the coup against Kurth, and was forced to flee to Silesse.

It is uncertain what became of Chalphy after the Battle of Belhalla and during the days of the Grannvale Empire under Emperor Arvis; Sigurd's son Seliph spent the following seventeen years in exile in Isaach, along with Oifey, a cousin of the Chalphy family and one of its knights. Eventually, Seliph's liberation army swept through Miletos to travel to Grannvale on its quest to end the Empire's tyranny, and Arvis used Chalphy as a defense point against the invasion. His efforts failed, and the rebel army reclaimed Chalphy before going on to defeat the rest of Grannvale; after the war, Oifey was appointed its Duke while Seliph became the new King of Grannvale. 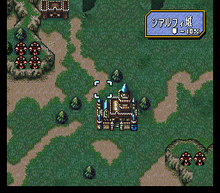 Chaphy Castle in the Final Chapter

Chalphy Castle is one of the castles present in the Prologue, Chapter 10 and Final Chapter. In the Prologue and Final, Chalphy acts as the home castle; in Chapter 10, it is the last castle to be seized by the player, controlled by Arvis.