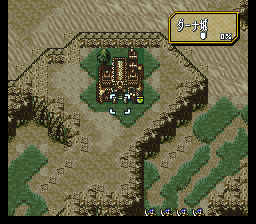 Dahna, in Chapter 7 of Genealogy of the Holy War.

Dahna (Japanese: ダーナ Darna) is a fortress city located in the midst of the Aed Desert in Jugdral. An oasis amidst a harsh desert, Dahna is considered a sacred site in Jugdrali culture, as it is where the Miracle of Dahna took place.

Late in the regime of the Loptrian Empire, Dahna Fortress was the headquarters last refuge of the revolution against the Empire's grasp, and by Grann 632 the dwindling remnant of the rebellion had barricaded itself within Dahna, knowing they were only delaying their inevitable defeat. Their fortunes changed with the descent of Naga and eleven other dragons upon Dahna, an event known as the Miracle of Dahna; the dragons conferred their powers upon twelve of the warriors within, transforming them into the Twelve Crusaders.

Following the Loptrian Empire's downfall and the rise of the modern nations of Jugdral, Dahna came to be regarded as a holy site by Jugdral's people, particularly in Grannvale. As such, in Grann 757 when reports arrived in Grannvale of an assault on the city by the armies of Isaach (in reality, only the handiwork of Ribaut[1]), Grannvale declared war on Isaach, a war which Isaach ultimately lost. In the aftermath of the Battle of Belhalla, the dancer Silvia left her children, Coirpre and Lene, in the Dahna convent before disappearing.[2]

In the intervening years, Dahna came under the leadership of Bramsel, a former merchant, referred to as the city's Count. Under Bramsel, Dahna acted as a servant state to the Grannvale Empire.[3] When Seliph's liberation army came to the Aed Desert, Bramsel sought to defeat him personally in a bid to win the bounty placed upon him, and so deployed his mercenary army following Seliph's capture of Fort Melgen, preying on Seliph's weariness from fighting both the Loptr Church at the Aed Shrine and Ishtore at Melgen. His bid failed, and Dahna was seized by Seliph, where he learned from Lewyn the legend of the Miracle of Dahna.

Dahna is one of the castles present in Chapter 7 of Fire Emblem: Genealogy of the Holy War. It is the third castle to be challenged in the chapter's course, with its army emerging following the capture of Melgen; before then, it is a neutral castle and travel to it is obstructed by guards posted near its borders.