Leonster (Japanese: レンスター Lenster) is one of the four small kingdoms comprising the Munster District of Jugdral, situated in the District's north. Founded by the son of the Njörun of the Twelve Crusaders and considered to be the leader of the District coalition, it was the sole defense against the aggression of the District's southern neighbor Thracia until its eventual fall in Grann 762. 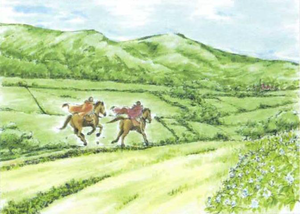 Leonster was originally part of the territory of Thracia, following its foundation by the Crusaders Dáinn and Njörun in Grann 648. Following the Tragedy of the Gáe Bolg, the Thracian throne was succeeded by Dáinn's son, a cruel and ill-tempered man who terrorized and suppressed the nation's people. In response, Njörun's son led a coalition of Thracian dukes in revolt against Dáinn's son, claiming the northern half of the peninsula as their own individual nations; with Grannvale's mediatory intervention and the eventual assent of Dáinn's son, the territory formally seceded from Thracia and became the independent Munster District, with Njörun's son founding Leonster as the coalition's leader kingdom.[1]

In the subsequent century of cold war between the Munster District and Thracia, Leonster's elite Lanceritter knight legion was the primary deterrent obstructing Thracia's wish to reclaim the lush northern lands of the peninsula; no matter what they tried, Thracia was incapable of advancing past them. The stalemate finally shifted in Grann 761: while on an expedition in the Aed Desert, Leonster's Prince Quan, Princess Ethlyn and the Lanceritter were ambushed by a Thracian army spearheaded by its King Travant and were massacred. With Leonster's defenses weakened, Thracia launched an assault on the District with the support of the traitorous Raydrik of Conote, causing the downfall of Leonster; the castle was set alight by Thracian forces, and the Leonster knight Finn was forced to flee with the infant prince Leif, his wife Lachesis and his daughter Nanna. Thracia's hold on the District was short-lived, with the Grannvale Empire launching a strike on the District. Thracia was cowed into becoming a servant state to Grannvale, and as with the rest of the District, Thracia fell under the occupation of the forces of Friege under Bloom.

Fifteen years later, in Grann 776, Leif led a liberation army through the Munster District, culminating with the reclamation of Leonster; however, his forces sustained heavy casualties from this endeavour and were trapped in a siege by the Friege army, but was saved by the timely arrival of Seliph's army to provide support in freeing the Munster District. Following the conclusion of the war, Leonster was assimilated into the New Kingdom of Thracia under Leif's rule, acting as his capital.