Yngvi (Japanese: ユングヴィ Jungby) is one of the six noble houses of the Kingdom of Grannvale. It comprises the south-western region of Grannvale, near the Jun River and the border with Verdane, and is situated west of Chalphy. It was founded in the year 649, shortly after the fall of the Loptrian Empire, by Ullr of the Twelve Crusaders alongside Grannvale itself and its other duchies; its ruling family are her descendants and possess her holy bloodline, permitting them to wield the holy bow Yewfelle. As with the other duchies, House Yngvi commands their own elite squadron of knights: the Beige Ritter, an archer batallion.

In Grann 757, Yngvi's then-Duke Ring and his son Andrey departed with the Grannvale army to go to war with Isaach, despite their disagreements;[1] at his daughter Edain's request, Ring left the Yewfelle behind with Edain in case she found her lost sister, Brigid, its sole inheritor out of Ring's three children.[2] With Grannvale mostly defenseless, neighboring Verdane launched a surprise assault on the country, laying siege to Yngvi Castle. Verdane's prince Munnir quickly overpowered the Yngvi knights led by Midir and abducted Edain, taking her back to Verdane with him with the intent of forcing her into marriage. In response, Sigurd of Chalphy launched a counter-offensive against Verdane, freeing Yngvi Castle and invading Verdane to attempt to rescue Edain. Meanwhile, at the climax of the Isaach war, Andrey allied with Lombard and Reptor in their traitorous intentions, killing Ring and assuming the role of Duke of Yngvi for himself.[3] Andrey led the Yngvi army in assisting Myos and Daccar in the Silesse civil war, and in fighting Sigurd's attempt to return to Grannvale as part of Lombard's forces at Lubeck Castle; he died in the latter encounter.

Following Andrey's death, the Yngvi throne was assumed by his own son, Scipio. In the liberation war's final battle in Grann 778, Scipio and the Beige Ritter worked with Hilda of Friege in fighting Seliph's army, ambushing them as they crossed the woods between Dozel and Friege. Scipio was defeated in this battle, and at the war's conclusion Brigid's son Febail became the new Duke of Yngvi. 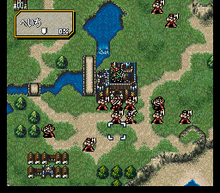 Yngvi Castle in the Prologue.

Yngvi Castle is present as a gameplay castle in the Prologue of Fire Emblem: Genealogy of the Holy War. Initially a partner castle guarded by Midir, it is seized by the Verdane army in their siege of it, and after they abduct Edain, Sigurd's goal is to seize Yngvi back.