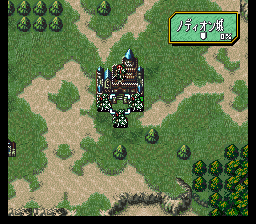 Nordion, at the start of Chapter 2 of Genealogy of the Holy War, protected by Lachesis, Eva, Eve and Alva.

Nordion (Japanese: ノディオン Nodion) is a state of the Kingdom of Agustria, comprising the southern region of the country near the border with Verdane. Its ruling noble family are the bearers of the holy lineage of Hoðr of the Twelve Crusaders, rather than the kingdom's royal family at Agusti.

Following the foundation of Agustria as a whole, Hoðr bore numerous children, but of his children only his youngest daughter inherited his Brand and major Holy Blood. This daughter married a member of House Nordion, inadvertently permanently transferring his Holy Blood to House Nordion. As a result, while the Agusti royal family were Hoðr's direct descendants, the Nordion family were the sole possessors of the holy blood; scions of Nordion were granted access to the Mystletainn, Hoðr's weapon, only if they swore fealty to the Agusti crown.[1] In the intervening years, Nordion became something of a military powerhouse among the Agustrian states, housing the famous Cross Knight cavalry brigade.

By Grann 757, House Nordion was under the rule of Eldigan, the Lionheart, a close friend of Sigurd of Chalphy. Under Eldigan, Nordion opposed the actions of King Chagall in his military build-up and heated anti-Grannvale sentiment, but Eldigan was imprisoned for trying to advise him on the matter, and later nonetheless entered Chagall's service despite his best intentions, clashing with Sigurd on the battlefield during the Agustrian war with Grannvale. In the war's aftermath, House Nordion was left deserted, as Eldigan's sister Lachesis, wife Grahnye and son Ares all fled Agustria in escape of the Grannvale occupation. Twenty-one years later in Grann 778, Ares returned to Agustria following the defeat of the Grannvale Empire by Seliph and assumed the Agustrian throne for himself.

Nordion Castle is present as a castle in Chapters 1 and 2 of Fire Emblem: Genealogy of the Holy War, as a partner castle. It is inaccessible in the former owing to a neutral guard blocking the path to it; partway through the chapter, the Nordion army under Eldigan emerges to fight Elliot. In Chapter 2, Sigurd's army's first task is to help Lachesis and her knights defend Nordion from an impending assault from Heirhein.