Agustria (Japanese: アグストリア Agustria), dubbed the "Dominion of the Lords", is a nation of Jugdral located in the continent's west, bordering Verdane to the south and Grannvale to the south-east. It was founded by the Black Knight Hoðr of the Twelve Crusaders. 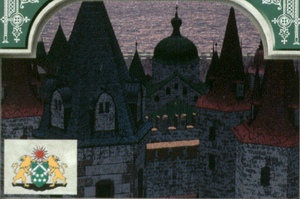 Agustria was founded by Hoðr in Grann 649 following the downfall of the Loptrian Empire, and he served as the first king of the Agusti royal family. Of his numerous children, only his youngest daughter inherited his major Holy Blood and his Brand, and was married to a member of the nation's noble house of Nordion. As a result, while the Agusti royal family were Hoðr's direct descendants, the Nordion family were the sole possessors of the holy blood; scions of Nordion were granted access to the Mystletainn, Hoðr's weapon, only if they swore fealty to the Agusti crown.[1]

At some point in their mutual history, Agustria entered a non-aggression pact with neighboring Grannvale;[2] however, by Grann 757, anti-Grannvale sentiment had started to spread among the lords of Agustria, including the prince Chagall. The pacifist king Imca was assassinated and succeeded by his son, who subsequently ordered an invasion of Verdane, by then a Grannvale subjugate under Sigurd of Chalphy. Sigurd retaliated with his own invasion of Agustria, killing the belligerent lords, protecting the villages from the greed of said lords, and seizing the capital of Agusti for himself; in response, Chagall fled to Madino Castle in the north, and Sigurd was granted one year by his friend Eldigan of Nordion to restore order to Agustria before departing. However, before the full year could elapse Chagall amassed another army and launched a strike against Sigurd. The renewed conflict ended with the deaths of both Chagall and Eldigan, the latter executed by Chagall for attempting to convince him to stand down. Shortly afterward, the Grannvale army under Lombard and Reptor arrived to arrest Sigurd on charges of treason against the Grannvale crown, and Sigurd fled to Silesse with the assistance of Annand. With its royalty and nobility eliminated, Grannvale assumed control of Agustria, and after the Battle of Belhalla it was entrusted to the Friege nobility along with the Munster District.[3]

Eighteen years after the Battle of Belhalla, inspired by the actions of Seliph Baldos Chalphy and his liberation army in Jugdral's east, the Agustrian people revolted against the Grannvale oppressors.[4] At the conclusion of the primary war with the defeat of Julius, Eldigan's son Ares and his cousin Diarmuid, both members of Seliph's army, waged a battle to finish off the Grannvale presence in Agustria and restore order to the nation, with the assistance of Leif of the New Kingdom of Thracia.[5][6] Afterward, Ares succeeded the Agustrian throne, and the nation acted as the strongest ally of the newly-reformed Grannvale under Seliph, experiencing great prosperity in the years to come.[7]

The southernmost territory of Agustria. Its nobility are the inheritors of Hoðr's Holy Blood and the Mystletainn.

The northernmost castle of Agustria. Following his defeat at and loss of Agusti, Chagall moved his royal court to function from Madino for the subsequent six months before his death.

Agustria is the subject of Chapters 2 and 3 of Fire Emblem: Genealogy of the Holy War; the former is set in the southern half of the country, with Evans as the home castle and Agusti as the final destination, while the latter is set in the upper half, with Agusti as the home castle and Orgahil as the final target. Additionally, Nordion is present in Chapter 1, but is inaccessible to the player owing to a guard posted between it and Evans.