Forseti (Japanese: フォルセティ Holsety) is an ancient Archanean divine dragon. In the Miracle of Dahna, he passed his power onto the sage Ced of the Twelve Crusaders, providing him with the wind tome which bears his name. In Silesse, the nation ruled by Ced's descendants, Forseti is revered as the "Wind God". 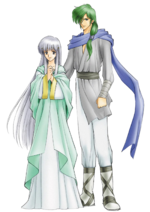 Lewyn of Silesse, around the time Forseti possessed him, with Naga's heir Julia.

The Miracle of Dahna

Forseti was one of the eleven dragons who joined Naga in coming to the aid of the people of Jugdral, after Naga had learned of the tyranny of the Loptrian Empire and the role of the rogue earth dragon Loptous in creating it. With the others, Forseti descended upon the fortress of Dahna in the event which later became known as the Miracle of Dahna. He underwent the rites of making a blood pact with the resistance fighter Ced, thus bestowing his power upon the human and transforming him into one of the Twelve Crusaders, and granted him a wind tome bearing his name to use in battle against Loptous. This wind tome carried not only Forseti's power, but also his passion and love for humanity, causing Ced to be strongly influenced by Forseti's persona and will.[1]

In Grann 760, the Book of Forseti entered the possession of Lewyn, Ced's latest heir, and from the moment he received it Forseti's persona began to inhabit him.[2] Lewyn later died in a duel against Manfroy in the Battle of Belhalla, but Forseti revived and possessed him. This act, one traditionally considered forbidden among the dragonkin, resulted in parts of Lewyn's original persona being irrevocably surrendered so Forseti could do what he had to, and so at the war's conclusion and Forseti's departure, Lewyn was incapable of returning to his original life as Silesse's king.[3]

Seventeen years later, Forseti (in Lewyn's guise) acted as a guide to Seliph Baldos Chalphy in his revolution against the Grannvale Empire, advising Seliph on tactical matters and relating to him the true history of the Crusaders and Loptous, in order to ensure Loptous's downfall and the return of peace to Jugdral. Only at the end of the war did he reveal his true identity of Forseti to Seliph, before departing to go on an unspecified journey.[4]

Forseti is technically a major character throughout the second half of Genealogy of the Holy War, owing to his possession of Lewyn; it is uncertain how much of Lewyn's dialogue is actually Lewyn himself and how much is Forseti speaking. If the player completes Genealogy twelve times, a scene is added to the opening demo reel in which Forseti, represented as a Sage, uses the Valkyrie Staff to resurrect Lewyn following his death at Manfroy's hands.

Compared to Naga, Forseti is somewhat younger and more idealistic. Whereas the majority of dragons are more reserved and conservative in their dealings with mankind, Forseti takes a keener level of interest and sympathy with the welfare and path of mankind. Had Naga not intervened, Forseti would most likely have chosen to live with mankind on Jugdral as their protector. Forseti's passion and love for mankind are imbued in the Forseti tome as a result; unlike the other Crusader weapons, this allows the wielder of the Forseti tome to inherit Forseti's will as well as his power, causing Forseti to influence their decisions at minimum or outright possess them at maximum.[5] This effect on the wielder's personality is also why the Holy Blood line associated with the Forseti tome is named for Forseti himself, rather than the respective Crusader, as it is a facet all other holy weapons (save for the Naga and Loptous tomes) lack.[6]