The Munster District (Japanese: マンスター地方 Manster District) is the territory occupying the northern half of the Thracian Peninsula of Jugdral, to the north of Thracia and connected to Grannvale and Miletos in the east by a thin strip of land. Formerly part of the territory of Thracia itself, it is a coalition of four small allied kingdoms—Munster, Leonster, Ulster and Connacht—in addition to a small number of free cities. Its holdings occupy great swaths of lush and fertile land, a stark contrast to the peninsula's south; for this reason, the District's territory has been long sought by Thracia.

The territory comprising the Munster District was originally part of Thracia following its foundation by the Crusaders Dáinn and Njörun in Grann 648. Following the Tragedy of the Gáe Bolg, the Thracian throne was succeeded by Dáinn's son, a cruel and ill-tempered man who terrorized and suppressed the nation's people. In response, Njörun's son led a coalition of Thracian dukes in revolt against Dáinn's son, claiming the northern half of the peninsula as their own individual nations; with Grannvale's mediatory intervention and the eventual assent of Dáinn's son, the territory formally seceded from Thracia and became the independent Munster District, with Njörun's son founding Leonster as the coalition's leading kingdom.[1]

In the subsequent century of cold war between the Munster District and Thracia, Leonster's elite Lanceritter knight legion was the primary deterrent obstructing Thracia's wish to reclaim the lush northern lands of the peninsula; no matter what they tried, Thracia was incapable of advancing past them. This precarious balance shifted in Thracia's favor in 761, when under the direction of Veld of the Loptr Church,[2] Leonster's Prince Quan, his wife Ethlyn and half of the Lanceritter were assaulted and murdered by Thracia's King Travant and his Dragon Knights while attempting to cross the Aed Desert, an event known as the Aed Massacre. With the defenses of the District depleted and vulnerable, Thracia launched a full assault on the north, assaulting the city of Munster; the forces of Connacht and Ulster, along with what remained of Leonster, attempted to aid Munster, but the Connacht army under General Raydrik turned on Leonster at the Great River of Thracia, slaying King Calf, obliterating its army and ensuring the fall of the Munster District to Thracia. Travant's hold on the peninsula's north did not last long, as the newly-christened Grannvale Empire responded to a plea for reinforcements from Ulster, soundly defeating Thracia's army and forcing it to retreat.[3] The Munster District came under the rule of the Friege family, was renamed the North Kingdom of Thracia, and Duke Bloom of Friege was instated as its king; in the face of Grannvale's might, Thracia was left largely powerless.

Grannvale held power in the Munster District for thirteen years, during which time it increasingly became more brutal under the influence of Prince Julius and the Loptr Church, for which the District suffered. As with in other Grannvale holdings, the practice of child hunting came into practice by the allies of Grannvale in the region. Shades of rebellion flickered over the years, coming to a head when Leif, Quan's son, led a revolution army against Thracia and Friege in the year 776, uniting the scattered forces from the four kingdoms to depose Raydrik and destabilize the Grannvale hold on the District. The arrival of the rebellion led by Seliph of Chalphy, and its subsequent union with Leif's army, marked the end of the Grannvale occupation and the death of Bloom. Following the fall of Grannvale to Seliph's forces, Leif and his sister Altena unified the Munster District and Thracia into the New Kingdom of Thracia.

Notable locations in the Munster District 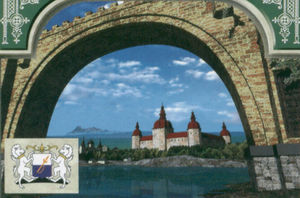 One of the four kingdoms and sharing its name with the District as a whole, Munster is the southernmost kingdom and the closest to the Thracian border. Following the Connacht betrayal of the other District nations, its General Raydrik was appointed Duke of Munster by Grannvale and occupied the Munster castle, until it was freed by the efforts of Leif and Ced's Magi.

Ulster is one of the four kingdoms. Some time into the Grannvale occupation, its king was executed for harboring the fugitive Leif, and his daughter Miranda was taken hostage by the Loptr Church. Ulster eventually became the Grannvale occupation's seat of power, with King Bloom ruling from its palace until assaulted by Seliph's army.

Connacht is one of the four kingdoms. Under its General Raydrik, Connacht betrayed the Munster District to Thracia and was a major player in the District's fall. Years later, following his defeat at Ulster, Bloom retreated to Connacht and launched a final stand against Seliph and Leif's united forces.

Tarrah is a free city of the Munster District. During his years on the run from Grannvale and Thracia, Leif was given refuge by the ruler of Tarrah, an act which would draw the ire of Grannvale and bring the city into conflict with its forces. Despite its best efforts to defend itself under the protection of Deen of Thracia and, eventually, Leif's army, in time it fell to Friege, Thracia and the Bergrosen, forcing its ruler Linoan to flee with Leif; at the behest of Prince Arion, Thracia took control of the city in an effort to protect it from the Bergrosen.

Melgen is a fortress located on the border of the Munster District, to the south of Dahna and the Aed Desert, situated in a valley of the same name. When Grannvale came to the Thracian Peninsula, Melgen Valley was the site of the battle which resulted in the defeat of Thracia and the Grannvale claim to the Munster District.[4] In the early days of Seliph's liberation army, Bloom's son Ishtore used it as a defense point to attempt to end Seliph's army before it entered Munster.

The Great River of Thracia is the largest river of the Thracian Peninsula, running through the Munster District between Leonster and Munster and acting as a crucial resource for the north,[5] as well as a valuable strategic defense point for any army. It was at the Great River of Thracia that Connacht turned on its former allies, and that King Calf and much of the Leonster army was slain in 762.[6] Over a decade later, following his reclamation of Leonster, Leif fought the Gelb Ritter at the river as his army marched toward Munster.

The Munster District is the subject of the second half of Chapter 7 and Chapter 8 of Fire Emblem: Genealogy of the Holy War, and is almost the entire focus of Fire Emblem: Thracia 776.