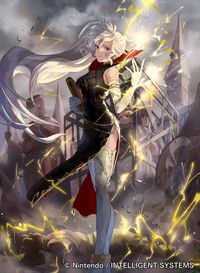 Artwork of Ishtar participating in the child hunts, from Fire Emblem Cipher.

The child hunts are an infamous practice of the Loptrian Empire. They are primarily depicted during the events of Fire Emblem: Genealogy of the Holy War and Fire Emblem: Thracia 776. It is an action in which members of the Loptr Church gather non-Loptrian children to be used in sacrificial rituals for their patron god, Loptous.

To qualify as a child eligible for sacrifice, they must be of any age between seven and thirteen.[1] There appear to be no other real requirements; both boys and girls are shown being taken away as sacrifices. It appears that not only commoner children are abducted, as even the child of the renowned Thracian general Hannibal, Coirpre, ended up taken.[2] The number of sacrifices sent to Grannvale at one point ballooned to the point of overrunning Chalphy castle with child prisoners;[3] suggesting a lax and wide ranging selection process. It is also said that hundreds of victims are sent off daily in just the Thracian peninsula;[4] further supporting the selection methods favoring increasing the numbers of sacrifices.

The victims were primarily abducted by the military forces of the noble houses of Grannvale; for example, the Friege noble house was responsible for numerous abductions occurring in the Munster District. Once the children are gathered, and generally stored in various prisons and dungeons, they would be received by Loptrian priests to be delivered to the Empire's capital.[5]

Fate of the victims

Common belief among the commoners of Jugdral is that the children taken in the child hunts were ritualistically killed; though the exact process appears to be a bit more involved. Nonetheless, it still results in the death of most victims.

According to Julius's explanation to Ishtar in Chapter 4 of Thracia 776, the children are rounded up from the non-Loptrian populace to determine their worthiness of becoming nobles in the new Loptrian Empire.[6] After the children are gathered, Julius and other Loptrian priest begin the grooming process to destroy familial ties and friendships. Once their mental demolishing is complete, the victims are put into numerous rounds of combat against one another to the death; the survivors are then deemed worthy of living in the Loptrian Empire.[7]

While Julius tells Ishtar that those deemed worthy become nobles if they survive,[6] he later uses the term "slave" when discussing the victims.[8] Considering Ishtar is his fiancée and already participates in the hunting for him reluctantly, he may have twisted his words to make it sound more appealing in his initial explanation.

The first known report of major child sacrifice in the name of Loptous occurred four years after the initial founding of the Loptrian Empire. In Miletos during the year Grann 452 an event, known as the "Sorrow of Miletos", occurred in which numerous children were offered as sacrifices.

During the revival of the Loptrian Empire

When Julius rose to power by suppressing his father, Arvis, he began reinstating many practices of the Loptrian Empire; the practice of child hunting included. News of the child hunts spread over Jugdral, though some initially thought these were nothing but rumors.[9]

The hunts were, of course, met with much opposition in many regions; regardless, several noble houses complied with the practice due to the alleged approval of Emperor Arvis.[10] Arvis himself opposed them, however, and covertly delivered children away from the Empire when he had the opportunity; he was generally prevented from doing so by Julius and the other Loptrians. The hunts were often the sparks causing rebellions in many regions, though until the rise of Seliph's and Leif's liberation armies they were generally successfully suppressed by the Empire.[11] In some cases nobles mostly cowed by the empire would refuse to enforce the practice while managing to stay subservient to the Empire.[12]

Groups, like the Magi and Fiana Freeblades, sprung up around Jugdral with the goal of opposing the Grannvale Empire and rescuing abducted children. The two before-mentioned groups were primarily active in the Munster District of the Thracian Peninsula. Soldiers of the empire, such as Olwen and Amalda, also worked against the child hunts by not reporting remote villages to the Empire[13] and by defecting to rebel groups.

The hunts ended with the death of Julius and the fall of the new Loptrian Empire at the hands of Seliph's liberation army in Grann 778. 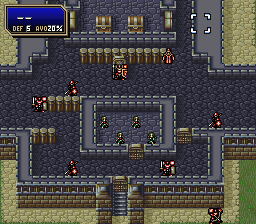 During both Fire Emblem: Genealogy of the Holy War and Fire Emblem: Thracia 776 victims of the child hunts appear as NPC civilian units that can be rescued by the player. In Genealogy of the Holy War the unit that rescues one of the civilians gains a free Level Up as reward. Typically in these situations they will be chased after by enemy units that will kill them if they catch up with them.

Thracia 776 also features rescuing victims in several chapters, though it is more involved than it is Genealogy of the Holy War. Typically the player must protect the civilians from enemy forces while they retreat from the map to a predetermined tile. Enemy units are very capable of killing or capturing the victims. Generally saving some of all of the civilian nets an item reward at the end of that chapter or a later chapter; for example Coirpre gives Leif a valuable Warp staff if he is rescued from Kelbeth dungeon in Chapter 3.[14]