Isaach (Japanese: イザーク Isaac) is a nation of Jugdral situated in its north-eastern corner, adjoining Silesse and the Aed Desert. It was founded by the Sword Saint Od of the Twelve Crusaders, and its people widely practice a noble warrior culture centered around swordplay. 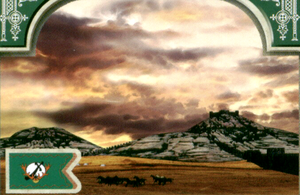 In Grann 757, Grannvale declared war on Isaach following an assault on the sacred site of Dahna, attributed to Isaach's army; in reality, the Dahna offensive was solely the work of Isaach's Ribaut nobility, whose leader was promptly executed by Isaach's King Mananan for his belligerence. Mananan attempted to negotiate with Grannvale over the situation's reality, head of Ribaut's leader in hand, but was assassinated before his news could reach Grannvale's Prince Kurth. In retaliation, Mananan's son Mariccle engaged Grannvale in a full-scale war;[1] knowing of his imminent demise, he tasked his half-sister Ayra with escorting his son Shannan to safety outside Isaach. By Grann 759, Grannvale had won the war and seized Isaach as its own territory, administered by the Grannvale's Dozel noble family under Danann.

Two years later, when Sigurd of Chalphy – branded a traitor by Grannvale – sought to return home to clear his name, he entrusted Shannan and Oifey with the care of his infant son Seliph; accurately guessing that Danann's occupation would not have full control over Isaach yet, he tasked the two with seeking refuge in Isaach's most remote regions,[2] along with other children from their army: Ayra's children Larcei and Scáthach, and Lachesis's son Diarmuid. They settled in Tirnanog, a far-flung village in the northwest of Isaach; some time after the Battle of Belhalla, they were joined by Edain of Yngvi and her children, Lana and Lester.[3] During their seventeen years in hiding, Shannan worked quietly to establish a revolution army against Grannvale; in Grann 777, however, Danann finally learned of their presence in Tirnanog and ordered a strike while Shannan and Oifey were out of the country on other errands. In response, Seliph emerged to lead the charge against the Dozel occupation, soon defeating it and freeing Isaach from Grannvale control. Following the liberation war's conclusion, Shannan succeeded the Isaachian throne.

The capital city of Isaach and the seat of power of its royal family. During the Grannvale occupation, it was held by Iuchar, Danann's middle son.

Ribaut was home to one of the two known noble families of Isaach. Its army was responsible for the assault on Dahna, inciting the war with Grannvale; its king was executed by Mananan for this act, and its prince Galzus fled. Following Isaach's defeat, Ribaut was occupied by "King" Danann as his seat of power over Isaach as a whole.

Sophara was the home of another Isaach noble family, whose only known scion is Chulainn. During the Grannvale occupation, it was held by Iucharba, Danann's youngest son.

A remote castle in Isaach's north. In Grannvale's occupation, it was administered by Harold, a general and confidante to Danann.

The far-flung village of Tirnanog is located in the remote reaches of Isaach's north-west. Mostly avoiding the scrutiny of Danann's occupation, it was the birthplace of Seliph's revolution.

Isaach as a whole is the subject of Chapter 6 of Fire Emblem: Genealogy of the Holy War, with Tirnanog as the home castle and Ribaut as the final target of the chapter. Ribaut also serves as the home castle of the following chapter.