Not to be confused with the similarly named character, Eda.

Edda (Japanese: エッダ Edda) is one of the six noble houses of the Kingdom of Grannvale. It comprises the south-eastern corner of Grannvale, east of Chalphy and south of Velthomer. It was founded in the year 649, shortly after the fall of the Loptrian Empire, by Archbishop Bragi of the Twelve Crusaders alongside Grannvale itself and its other duchies; its ruling family are his descendants and possess his holy bloodline, permitting them to wield the Valkyrie Staff. It is also the home of the Church of Edda, a religion founded by Bragi which sought to restore the traditional beliefs of Jugdral and heal the damaged caused by the Loptrian faith.[1]

During the internal turmoil in Grannvale in Grann 757–760, the then-head of House Edda, Father Claud, sought to assist Sigurd of Chalphy by seeking the truth of the rumors alleged against him at Bragi Tower. When Claud learned the truth – that Reptor and Lombard had assassinated Prince Kurth and framed House Chalphy – he was declared a traitor and forced into exile along with Sigurd. Following Claud's death in the Battle of Belhalla, House Edda had no known remaining heirs and so was occupied by Grannvale administrators. Nearly two decades later, in the final battle between Seliph's liberation army and the Grannvale Empire, Edda was his army's first target after reclaiming Chalphy, and its administrators Rodan and Juphiel were defeated in battle. Following the end of the war, rule of Edda was succeeded by Claud's children, allies of Seliph. 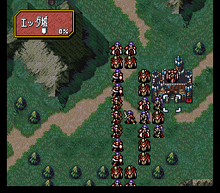 Edda Castle in the Endgame.

Edda Castle is present as a gameplay castle in the Endgame of Fire Emblem: Genealogy of the Holy War. Situated directly to Chalphy Castle's east, it is Seliph's first target in the course of the Endgame, controlled by Juphiel of the Loptr Church.