Velthomer (Japanese: ヴェルトマー Velthomer) is one of the six duchies of the Kingdom of Grannvale. It is located in the north-east corner of Grannvale, near the border with the Aed Desert and north-east of the capital Belhalla. It was founded in the year 649, shortly after the fall of the Loptrian Empire, by Fjalar of the Twelve Crusaders alongside Grannvale itself and its other duchies; its ruling family are her descendants and possess his holy bloodline, permitting them to wield the holy fire tome Valflame. As with the other duchies, House Velthomer commands their own elite squadron of knights: the Rot Ritter, an army of fire mages.

Around the years Grann 736-738, House Velthomer experienced internal familial turmoil. At the time, the state was ruled by Duke Victor, a notorious drunkard and philanderer who nonetheless had a wife, Cigyun. Despite constant news of Victor's abuse of and philandering toward countless mistresses and the news of Victor raping one of her closest attendants, Cigyun nonetheless remained with him until she had an extra-marital affair with Kurth, Grannvale's prince. Upon learning of this, Victor denounced the pair in a final message and committed suicide, causing Cigyun to flee Grannvale.[1] With Victor's death, rule of Velthomer fell to his seven-year-old son, Arvis, who successfully retained hold of Velthomer's leadership with Kurth's behind-the-scenes support.[2]

By Grann 757, Arvis had been assigned the role of leader of the Weissritter in Belhalla, tasked with the care of the ailing king Azmur while the armies of Grannvale were at war with Isaach. In Grann 760, as part of the plan to "fight" the alleged traitor Sigurd's return to Grannvale, the Rot Ritter under Aida and the Friege army under Reptor used Velthomer Castle as their last line of defense, only for Aida and the Rot Ritter to turn on Reptor as per Arvis's plan and assist Sigurd in killing Reptor's army, after which Aida led Sigurd to the capital to be received by Arvis and the Rot Ritter, leading to the Battle of Belhalla.

Through marriage to Deirdre, Arvis became Grannvale's emperor, departing Velthomer; at some point in the intervening years, in an effort to thwart his Loptous-possessed son Julius, Arvis hid the Book of Naga in the treasury of Velthomer Castle in a box whose key was bound to Deirdre's circlet, for later use by its sole remaining potential wielder, Julia. At the conclusion of the war, the Velthomer throne was ascended by Saias, Arvis's illegitimate son and full-blooded heir. 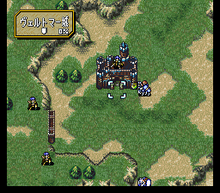 Velthomer Castle is present as a gameplay castle in Chapter 5 and the Endgame in Fire Emblem: Genealogy of the Holy War. It acts as the final destination of Chapter 5, albeit with the goal of talking to its NPC guardian, Aida; in the Endgame, it is the penultimate castle, situated on the other side of Belhalla and guarded by Manfroy; while assaulting it is not necessary to complete the game, doing so will allow Julia to be rerecruited and the Book of Naga to be obtained.