Flametongue (Japanese: 灼熱のブレス Scorching Breath) is a breath weapon which that debuted in Fire Emblem: The Blazing Blade as the weapon used by the game's final boss, the dragon. It nullifies its enemies' defense to inflict immense damage, and it can attack over an impressive range of 1-3 tiles. It shares the icon of the Firestone from the preceding game, Fire Emblem: The Binding Blade, and has very similar stats.

It also appears in Fire Emblem Heroes as one of the lesser breath skills learned by several dragon units. 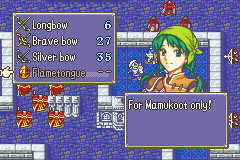