Thögn (Japanese: ソグン Thögn) is a weapon skill in the bow category which debuted in Fire Emblem Heroes. It is a personal weapon of the Legendary Hero variation of Lucina. Thögn is a skill that, in addition to boosting its wielder's Speed at all times, also grants its wielder all-around stat boosts during combat when initiating combat against a user of a melee weapon skill. 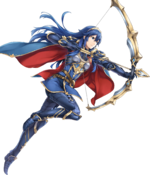