It should be noted with the playable classes in the DS remakes, that have visible hair in their battle animations, such as Falcoknight and Hero, their battle sprites will change depending on the hair color assigned to the playable character using that class.

Only blue haired characters will use this battle sprite as a Falcoknight.

Like to explain, whilst Caeda and Catria will use the blue FalcoKnight battle sprite above, Palla's version will have green hair, Est will have Pink and a reclassed Athena will have brown hair in her sprite. This again, doesn't apply to every class, like the helmeted Warrior and General sprites are the exact same for all characters. Anyhow it might be something to keep in mind when uploading Battle sprite. So maybe something like Bs_fe11_playable_falcoknight_blue_sword.png and Bs_fe11_playable_falcoknight_pink_lance.png would be filenames to have? That said, I don't know if anyone wants to upload all the hair colors, even for the default character/class combinations? Emperor Hardin (talk) 21:19, 26 March 2022 (UTC)

I actually thought that all the pegasus knights shared the same sprites since the sprites were on the Est, Palla, Catria and Caeda sprites galleries; upon checking I now realize that this isn't the case. Maybe I'll change the file to be (Bs fe11 caeda playable falcoknight sword.png) or something like that. And yeah I have completely no motivation to upload every single possible battle sprite since that would be incredibly tedious, so the images are probably not going to be uploaded until someone else masochistic enough decides to upload them. Eyacorkett (talk)

Understandable about not wanting to upload all the many hair colors. In FE12, but not FE11, the enemy palette can also show hair color, so like enemy Est in the prologue of FE12 will have pink hair with her red palette, but if you attack Est in Chapter 18 FE11, she'll have the standard brown used by any other generic enemy pegasus knight. Do you want me to list all the hair colors in FE11 just for reference's sake? Emperor Hardin (talk) 22:33, 27 March 2022 (UTC)

I apologize for the the late response, I didn't realize that you replied. Yeah I would appreciate if you listed the hair colours in FE11 just in case I ever want to upload a battle sprite from that game. Eyacorkett (talk)

I accept your apology, I ended up late as well due to a tough day. There are the following hair colors in FE11
* Blue: The default hair color assigned. If any gender exclusive hair is assigned to a unit without access to that hair color, for example Pegasus Knight, Wrys, his female class animations will have blue hair.
* Green
* Pink: This is female exclusive, with Cecil and Est as the only characters off the top of my head to have it. Kris cannot have pink, even if female. Notably Roger in both games has pinkish hair, but it appears purple in battle.
* Gray: This hair color is male only in both FE11/FE12. Though animations for tier 1 classes with grey hair exist, they're never used as all grey haired characters like Jagen, Boah, Gotoh, Lorenz and Frost are all tier 2 classes. Additionally Kris cannot have gray hair, period, no matter the gender. Finally Frost, whom probably should be bald(?), is the sole playable character with grey hair in FE12 as all the other grey haired character are no longer playable.
* Red: Separate from pink and available to both genders.
* Purple: Female purple haired class animations exist in FE11 even though no female unit in that game has purple hair. These are subsequently used in FE12.
* Brown: There is, oddly, no black hair animations, so alot of characters with black hair like Navarre or even blue black like Athena or dark purple like Jake and Legion use this hair color.
* Blonde: Full blonde female class animations exist in FE11, even though the only female unit with that hair color assigned, Nyna, is an NPC. Yes, they gave her unit data. Again FE12 uses it.
* Bald: Male only, these units have their sprite altered to remove their hair in their battle animations. Male Kris can get this by talking to Wrys and agreeing to shave his head.
* Enemy Palette: All enemy units in FE11 have brown hair with a few like Hunters and Pirates having red or green hair for some reason. Additionally any character of the enemy faction will have those hair colors such as enemy Castor or an enemy Falcoknight Caeda in the VS mode suddenly becoming a brunette. The only exception is bald characters, like Darros. Even if made playable in FE11, they'll still have the enemy battle animation colors on the player side.
* Boss/Special enemy Palette: This is basically unused/unfinished in FE11, where bosses like Volzhin and Bentheon will have the standard enemy palette hair colors, but its finished in FE12. So Yodel has blue hair in his bishop sprite, matching his portrait, with other named enemy characters having assigned hair colors even if it isn't visible like Lang's white hair. The same applies to playable characters you encounter as enemies, like Luke in the Prologue, will still have green hair as a red unit or red faction Falcoknight Caeda in multiplayer having blue hair.
** Confusingly the brown/green/red hair colors on enemy palette, are separate from the brown hair colors of playable characters. So like Enemy Rody in the prologue has a much lighter brown hair color than the generic enemy Cavaliers. 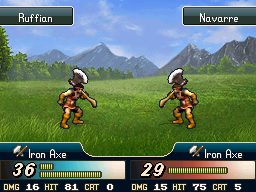 You can mouse over the above image for my commentary. Thoughts on all this, I find it confusing, personally? Emperor Hardin (talk) 07:15, 1 April 2022 (UTC)

This is actually kind of reassuring since now I know there aren't that many hair colours in DSFE, so thanks for that. Maybe if I feel like it I might use cheats to get battle sprites for everyone. Also sorry that you had that tough day, I hope you got whatever happened sorted out. Eyacorkett (talk)

The reclass anything code will probably help you get hair color screenshots, as will the battle mode in FE12. There's also sprite ripping too, I know the spriters resource has quite a few FE12 sprite sheets with, I believe, color schemes, for the various hair colors? I have some FE12 enemy hair comparison screenshots myself, if you want me to post them for you to transparent or similar?
To explain a bit more about bosses, if you recruited, Jiol in FE11 with a code or device, even when Jiol entered combat on your side, he'd still use the red General battle animations. Conversely if you recruited Lang in FE12, not only would he have white hair if reclassed out of General, but his battle animations when with the player's army would be the player class blue sprites. Generic enemies in FE12, will still always be red, no matter which side they're on. In that fighter screenshot, the left fighter, is actually with the blue army.
I'm not an expert but it seems there was some thought to making boss units have distinct hair colors in FE11, I'd like to finish that in a hack, even though its a very small thing, few people care about.
Things still aren't any better today, but I'm trying to make do. Emperor Hardin (talk) 23:19, 1 April 2022 (UTC)
I'm doing better now. How are you getting those FE12 sprites? Could you use any screenshots to transparent and get new battle sprites? Emperor Hardin (talk) 17:39, 7 April 2022 (UTC)

I'm still chipping away with uploading every single battle sprite. It's a pretty slow but steady process. One major thing that I pretty much have to do is completely revamp how these images are named so instead of (File:Bs fe11 hardin cavalier lance.png), it's (File:Bs fe11 brown cavalier lance.png). Also, it's nice to hear that you're doing better now. —The preceding unsigned comment was added by Eyacorkett (talk • contribs). Remember to always sign your talk page comments with ~~~~!

The armored characters, including Barons and Emperors seem to all have a skill that lets them do mass movement(normal movement?) in exchange for one willpower chip, which is also used when mounted units use Canto and Dancers dance. The skill is also translated as "Heavy armor" in some parts of Aquantis's page and google translates "【重歩】" as "Heavy Walk." So I guess it seems like a Proto Armored March, it sounds interesting.

Gotta be absolutely honest here I'm not familiar with the rules of the TCG so I have no idea what mass movement or willpower chips are so I can't really comment on that.
On the Baron class being split, I think we could either just differentiate it with something like Baron* and Baron* or put it in a trivia section. —The preceding unsigned comment was added by Eyacorkett (talk • contribs). Remember to always sign your talk page comments with ~~~~!

Sure, but maybe we should go with the "heavy walk" translation over the "official movement" translation, as the former is more informative.
I'm not saying to split the Baron page, but it might be worth noting somewhere. Emperor Hardin (talk) 18:06, 7 April 2022 (UTC)

On the subject of Adrah and Medeus's FEH profile

I'm not sure that Axe Fighter in Medeus's Meet the Heroes Profile is meant to be Adrah. For one, even in the inaccurate Meet the Heroes profile, there's no mention of Adrah attacking Medeus in "the peaceful world", just that he took from the Temple which Medeus doesn't reside in as he was guarding the Dragon's altar at the time.

Two the artwork seems to coincide with Medeus's actual backstory that the newly advanced human race was mercilessly attacking Manaketes rather than a burglar sneaking into a temple and making off with the loot. The fighter in the picture also appears to be a generic, which doesn't fit with Adrah.

All in all, why I think it might be worth a note that the human attacking Medeus might possibly be a depiction of Adrah, but we can't say for sure that its him, especially given how faulty Medeus's whole "Meet the Heroes" profile is. Emperor Hardin (talk) 07:45, 25 June 2022 (UTC)