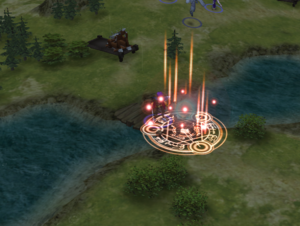 The Black Knight uses warp powder to depart from an encounter with Ike.

Warp powder (Japanese: 転移の粉 warp powder) is a magical substance found in Tellius which is used to instantly travel over long distances to a destination of its user's choosing. It was notoriously used by the Black Knight throughout the Mad King's War and in the years afterward.

Warp powder has a very long transportation range, being frequently used to transport its users across most of Tellius. While very effective, it has a notorious side effect: warp powder has a draining effect on a person's stamina when used, to the point of completely exhausting ordinary beorc.[1] While stronger individuals such as the Black Knight are not completely drained by it, it still takes a toll on their strength, which discourages overuse of the powder.[2]

The use of warp powder does not appear to have been particularly widespread in Tellius, given how Ashnard describes it as "fey and of unknown origin" when talking about the Black Knight's use of it.[2] Warp powder was historically used by the senators of Begnion, but by the year 648, they had invented the Rewarp staff to allow them to transport themselves without suffering the exhausting side effect of warp powder.[1] The Black Knight's master was involved with the Begnion senate, so he is probably the source of the Black Knight's powder supply, along with his blessed armor and his sword, Alondite.

Warp powder was evidently planned to appear as an item in Fire Emblem: Radiant Dawn, but in the finished game all that remains is an unfinished unused item with no functionality programmed at all. Localizations of the game label it as "dummy" and do not give it a proper name string, and its description in all languages is the same debug string used by almost all unused items in Radiant Dawn. The Warp Powder finally gained a usable role in Fire Emblem Heroes, when it was added to the game in the Guided by a Dream update as a type-B passive skill usable by Zelgius and allowing him to warp to the side of a nearby ally when his health is high. It is unknown what the extent of the Warp Powder's intended use in Radiant Dawn, although it might have been intended to be an item variation of the Rewarp staff in line with its role in the story as well as its effect in Heroes.

Other than this, warp powder only ever appears in Path of Radiance and Radiant Dawn in scripted cutscenes where the Black Knight uses it to warp in and out of maps in which he appears.