Volug (Japanese: オルグ Orugh) is a wolf laguz from Hatari and a servant of Queen Nailah. He accompanied Nailah and Rafiel on their journey to Tellius across the Desert of Death, where they met Micaiah and Sothe. He became a companion to Micaiah throughout the war for Daein's liberation, and remained with her as part of the Daein army after Nailah left for Gallia. 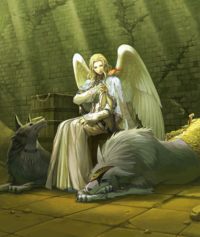 Volug and Nailah flank Rafiel as he sings.

Just as the people of Tellius believed there to be no surviving lands other than their own after the Great Flood, the people of Hatari also believed that they were alone. This changed when Rafiel was found wandering the Desert of Death by Nailah after the Serenes Massacre. Around the year 648, Nailah took Volug with her on an expedition to follow Rafiel to Tellius. The group took shelter in one of the desert's laguz ruins after a mysterious voice guided Rafiel there, and there they met Micaiah and the Dawn Brigade, who had also followed a voice to the ruins.

Nailah and Rafiel desired to travel to Gallia to visit Rafiel's surviving family, so Micaiah and Sothe offered to escort the group through Daein to protect them from anti-laguz bigotry so they could safely reach Crimea and contact Ike to reach Gallia. However, first the Dawn Brigade had to venture back into the Desert of Death to find the rumored heir of Ashnard, so Nailah volunteered Volug's services to Micaiah to guard her in the guise of a common dog. Volug sensed a massive number of beorc gathered to the south of their location, which led them directly to this heir, Pelleas, and the Begnion siege of his hideout.[1] When Micaiah and the Dawn Brigade joined with Pelleas's forces to form the Daein Liberation Army, Volug accompanied them and fought by their side throughout the war against the Begnion garrison. Throughout the war Micaiah and Sothe managed to keep Volug's laguz nature a secret from the majority of the army, preventing potential issues with Daein's notorious bigotry toward laguz.[2]

When the war ended with the liberation of Nevassa, Nailah and Rafiel departed for Gallia in the company of Tormod, but she left Volug behind to protect Micaiah. Volug helped the rest of the Dawn Brigade with the reconstruction of Daein, and when Begnion ordered Pelleas to join the war against the Laguz Alliance, Volug continued to serve under Micaiah despite the highly racist nature of much of the Daein army's war-mongering, as he knew why they were forced to fight and of Micaiah's motivation to save Daein. During the battle of Castle Nox, he passed this information on to Nailah as she attempted to approach, reaffirming her determination to help Micaiah.[3] He later participated in the battles against the Disciples of Order, and after the final battle at the Tower of Guidance, he returned to Hatari with Nailah.

Volug is a playable unit who is associated with Micaiah's party. After he joins in Part 1 Chapter 5, he remains with Micaiah's party through the rest of Parts 1 and 3. He can be freely allocated to any of the three armies in Part 4, although if he is assigned to the Greil Army, he unlocks a base conversation which gives a spare Elixir and discusses the nature of the ancient language.

Volug also appears as an enemy unit twice in Part 3, first in Chapter 7 and then in the Endgame, with the same stats and inventory which he had at the end of the preceding chapters.

Volug is a wolf laguz with forced Halfshift during part 1. As halfshift allows him to stay transformed but with only half the transformation benefits, he does not have to rely on items to stay transformed. He has the highest mobility in the team after Jill, only lacking flight and canto. Unlike Jill, he has full mobility in indoor maps, helpful for 1-7 and 1-E. He can also shove and rescue many units, including even the Black Knight. Volug has decent offensive base stats for part 1, doubling most enemy units and one-rounding less tanky ones. His defense is average but he has a very high base health and above average avoid, so his durability is one of the best on the team. However, his resistance is low and he is weak to fire magic. While Volug is a valuable unit through part 1, his experience gain is extremely low compared to beorc units.

In part 3, Volug's Halfshift is optional, though enemies are a lot more powerful so he performs better with normal laguz shifting. Volug is still one of the team's more durable and mobile units (especially with earth supports), though his base stats begin to fall behind. He has extremely high growths in health and luck, and good growths in skill and speed for a laguz, but his strength and defense growths are extremely low. In addition to his lower experience gain and being a laguz, Volug is a difficult unit to raise through part 3, and will be outclassed by other raised units on the team such as Jill and Nolan. His performance improves if his strike rank is increased, as it dramatically improves his attack power, especially if combined with beastfoe, so it is recommended to grind his strike rank in part 1 to prepare for part 3.

Volug will struggle to contribute in part 4, as mobile units are much more common and Volug will not have gained many levels. His bad strength growth, relatively low level, and low strike rank will limit him from contributing to combat, limiting him to being a rescue or shove unit unless babied significantly. He performs best on Ike's and Micaiah's team, due to high movement through ledges, forests, and desert.

Volug has the Wildheart skill which allows him to stay transformed with only half of the transformation boosts. This is only removable in part 3 but again, it is best to keep it equipped due to relative lack of laguz supporting items. He also has Howl but this skill is situational and unreliable. Volug is relatively low level and will remain low leveled for part 4, so he needs significant investment to be able to use a Satori Sign to learn Savage and boost his offense. His extremely high health base makes him a decent user of Wrath or Resolve, boosting his offense and avoid respectively.

Volug has an earth affinity which gives a massive avoid boost. When paired with other earth affinity units in part 1 like Nolan, Zihark, or Fiona, this can potentially give both units a +45 avoid boost, dramatically boosting their durability which is invaluable. A unit with a thunder affinity like Jill or Tauroneo work well too. Due to Volug's nature as a strong unit in part 1 and 3 but weak in part 4, it may be difficult to find a partner that fits a similar role as him with the same availability.

Volug is a dutiful and determined servant to Nailah and, later, Micaiah. He is a native speaker of the ancient language and, unlike Nailah, made little progress learning the common Tellius language. This led him to be remain almost perpetually silent, rarely speaking, because he felt that there was no use speaking a language that few around him could.[4] Almost all of his dialogue presented in Radiant Dawn is spoken in the ancient language and cannot easily be read, but if deciphered his generic support lines reveal a completely different side to Volug: he has an offbeat and even morbid sense of humor, sometimes wondering how enemies would react if he were to eat his foes,[5] poking fun at his own reticence,[6] and possibly jokingly claiming to be incredibly charming despite rarely speaking.[7] He prefers to remain near constantly half-shifted into his wolf form, as he feels it is more comfortable than his humanoid shape.[8]

Volug, Black Wolf of the Sands
Strangely, Volug was still in wolf form on the day he went home. Asked why, he said only, "It's more comfortable".

Volug (Nailah died)
Volug returned to Hatari to tell of Nailah's hopes and the great war. He hoped to migrate the whole nation.

Against Oliver in Part 4 Chapter 4

Volug is featured on two cards in Fire Emblem Cipher. He is one of two characters whose card quotes are written in the ancient language, the other being Leanne.