The Dark Forest (Japanese: 暗黒の森 Dark Forest) is the sixteenth chapter of Fire Emblem: Thracia 776. This is the first of two chapters on the "B" route; in order to play this chapter, Leif must have headed headed south towards Melfiye Forest in the previous chapter.

Leif's army has an altercation with Linecock's Loptian bishops from a secret temple in Melfiye Forest. In the forest, he encounters a wandering Sara, who joins his army for enigmatic reasons. He may also encounter Shannam, whom Homer can convince to join Leif's army by pitying his choice of siding with Loptian bishops. Once Leif defeats Linecock, he finds Princess Miranda of Ulster in the Loptian monastery, and she joins his army after briefly arguing with him over who is responsible for her becoming the Empire's hostage. She urges Leif to reclaim Ulster for her, and explains that Count Conomor of Ulster used to be her guardian.

Units are arranged based on their position in deployment order after Leif. 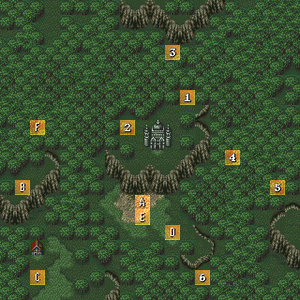 Locations and destinations of warp tiles.

This map features warp tiles. When a unit waits on a warp tile, they are teleported to a different tile. If the unit uses an action other than wait that ends their turn—such as attacking or using an item—on the warp tile or another unit is present on the destination tile, that unit is not teleported.

The locations and destinations of warp tiles in this map are: