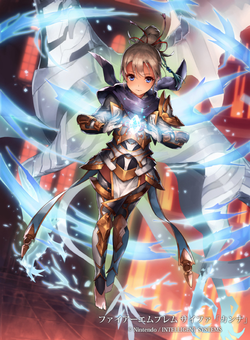 Kana channeling the power of a Dragonstone in Fire Emblem Cipher.

The stone (Japanese: 石 stone) is a weapon type which was introduced in Fire Emblem: Shadow Dragon & the Blade of Light. The stone category encompasses the special items used by units of various non-human species to transform into more powerful forms briefly to attack. This includes the dragonstones used by manaketes in every game to assume dragon form, and the beaststones used by taguel and other species from Awakening onward to assume various beast forms.

In addition to their considerable attacking power, all stones award a different set of stat boosts to their users when equipped, making their users extremely dangerous and often much more powerful than regular human units. However, they are usually extremely limited in number and it is relatively rare to have more than one unit capable of using stones, and stone-using units are completely helpless once all of their stones break.

Eleven different stone weapons have existed across the Fire Emblem series; eight of these are dragonstones, while the remaining three are beaststones.

Stones function the exact same way in every game except Mystery of the Emblem. Stone weapons grant their user substantial stat bonuses when equipped, reflecting the power of transformed state. Every time the user attacks or is attacked, the equipped stone is activated at the very beginning of the battle before either participant does anything, regardless of whether the stone user is within range to counter-attack, and the transformation is reverted at the battle's end and the unit appears in their humanoid form on the map. The stone's durability is consumed with every time the stone wielder actually attacks, not just when they transform without attacking. Without an equipped stone, needless to say, a stone-user will not transform, will receive no stat boosts, and will be completely unable to attack or counter-attack.

Although the existence of dragonstones dates back to the original Shadow Dragon & the Blade of Light and has persisted throughout the entire series, stones were technically classified and treated as regular items despite their offensive use for most of the series' history. The Nintendo DS remake Shadow Dragon was the first game to treat stones as a separate weapon classification, Awakening was the first to give stones their own supply convoy box, and Fates was the first to give stones a proper increasing weapon level; the Fates stone weapon level is shared between both stone types as well as the other non-human weapon types, and if a character has a class pool that includes wielders of both types of stone, the weapon level will carry over between both stone types.

In Mystery of the Emblem 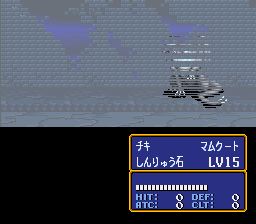 Tiki using a Divinestone to transform into a Divine Dragon in Mystery of the Emblem.

Fire Emblem: Mystery of the Emblem's dragonstones operate very differently from those of other games. While other games treat stones as equippable weapons, Mystery-style dragonstones behave as consumable items instead and the transformations they cause function similarly to laguz transformation. When used by a compatible Manakete unit, a dragonstone will transform that manakete into the matching dragon both in and out of battle. The transformation lasts for a minimum of five turns, with the duration randomly increased depending on the unit's current luck stat, calculated thus:

Once the allotted time has expired, the transformation automatically wears off at the beginning of the unit's next phase. Transformed Manaketes are not able to manually revert before their time is up.

A transformed Manakete receives alterations to their current stats depending on the stone used, mostly giving boosts but always reducing the speed stat. They are able to attack with a breath matching the stone they used (although for playable units, the breath weapon is not visible in their inventory and can only be seen when selecting the Attack command). As every transformation gives different boosts, they also give unique advantages, disadvantages, and terrain penalties. For instance, the Fire Dragon and Ice Dragon transformations introduce mutual effective strengths and weaknesses over each other, the Mage Dragon transformation gives an immense boost to resistance, and the Wyvern transformation provides the single highest base movement of any class in the Fire Emblem series.

Dragonstones are still affected by durability under this system. One point of durability is reduced every time a stone is used to transform. Stone durability is not affected at all by anything Manaketes do while transformed.

Of the two playable Manakete units, only Tiki is allowed to use all of the stone types available to the player. Bantu is only allowed to use Firestones.

In the DS games

A Firestone, one of the most frequently recurring stones, in the Fire Emblem Trading Card Game.

In the Archanea and Elibe games (every game where manaketes appear except The Sacred Stones and Fates), dragonstones were first created in response to great calamities which threatened the very being of dragons and which forced them to abandon living in their dragon bodies as their usual forms. When dragons assumed the human-like forms of manaketes, they sealed their power into gemstones to create dragonstones, which kept their power for them.[1][2] By sealing their powers into dragonstones, manaketes retained the ability to become dragons for brief, safe periods of time, but overusing a dragonstone can be harmful especially for younger manaketes.[3] As demonstrated by Bantu and Myrrh, manaketes are capable of being separated from their dragonstones for extended periods of time without suffering consequences to their health aside from being unable to achieve dragon form. When not in use, at least, dragonstones give off a glow.[4]

It is unknown if Magvel's manaketes have a similar history with their dragonstones. It is believed by Lyon that only two dragonstones exist anywhere in Magvel, one of which is Myrrh's.[5]

Dragonstones can also be used in human weapons to imbue them with immense power, and in this form are often called "orbs" or "gemstones" by humans. Weapons explicitly confirmed to contain dragonstones include Falchion, Aura, and the twelve regalia of the Twelve Crusaders; it is likely, although unconfirmed, that the five orbs of the Binding Shield are also dragonstones. The practice of using dragonstones this way is rare, use of these weapons is primarily restricted to those who have undergone blood rites with a dragon, and using such a weapon risks the human wielder's will being overridden by that of the dragon.[6]

Beaststones and their users are not currently known to have a history or purpose similar to dragonstones and manaketes in any game setting.

Stones in the Fire Emblem series by type