Gerxel (Japanese: ガーゼル Gerxel) is a figure in the Zoan religion and their "benevolent but dangerous god of destruction"[2] appearing in TearRing Saga: Yutona Heroes War Chronicles.

Technically speaking, "Gerxel" is the name of two people. Initially, it was given to Miradona by the Zoans. Later, a man named Kalbazan, after requesting power from Miradona, would take the name Gerxel, and is the more famous figure bearing this name. Many of the people of Lieberia do not realize that Miradona and Gerxel were originally two names for the same entity.[3]

This page primarily covers Gerxel as the person formerly known as Kalbazan and the antagonist of TearRing Saga: Yutona Heroes War Chronicles, and briefly covers Miradona. For more information on her see her page.

Miradona was left as an infant in a mountain, Mt. Cielo, on Lieberia carved out by her father so she could safely grow into adulthood while the other Emiyu assimilated into the earth.[4]

Eventually, having grown lonely in her isolation, she left her living space in search of companionship, finding the native humans, and eventually coming to be worshiped by them.[5]

After a time, having become fearful of her own power, Miradona retreated back into the mountain, created hordes of monsters to repel intruders, and ceased interactions with humans.[6]

Despite Miradona's disappearance, the Zoans continued to pray to and worship her. Around this time settlers from a nearby continent called Jugd arrived and began to form their own society. The Zoans, according to their doctrine, which declares that they are the chosen people and no others should exist, attempted to drive the Jugd settlers out.[7] However, they met with middling success.

The Jugdi settlers retaliated fiercely against the Zoans, even ignoring the Zoan's multiple declarations of surrender.[8] During this dark time the Zoans fervently prayed to their god for salvation. After a long period of silence, the Zoan religious leaders decided to travel into the mountain and speak with Miradona directly. All but one of the group sent died attempting to reach Miradona. The lone man, Kalbazan, having survived the onslaught of monsters, appealed directly to Miradona, and requested power to repel the invaders and save his people. Miradona, in her ignorance, complied with this request and allowed Kalbazan to drink a drop of her blood, granting him incredible power and the ability to transform into a mighty dragon.[9]

Unfortunately, due to the immense potency of Miradona's blood and his desire for revenge, Kalbazan went insane after accepting Miradona's gift.[10] He was however very successful in leading the Zoans and conquering the continent, founding the Zoa Empire and placing himself as the empire's god-emperor, and taking the name Gerxel.[11] 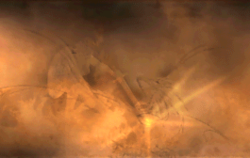 After conquering the continent Gerxel began to demand Jugdi women as sacrifices.[12] Miradona was ignorant to Kalbazan's actions for several years, though she eventually heard the cries of one of the sacrifices, Yutona, echoing through the caverns and came to investigate what was going on.[13] Miradona, horrified by Gerxel's actions, tells him to stop, but he refuses and attacks and wounds her.[14] Miradona, resolved to fix her mistake, revives the sacrificed Yutona and grants her the same power that was given to Kalbazan, with the addition of a method to seal it to prevent Yutona from going insane like Kalbazan.[15]

After this Yutona allied with the rebellion leader Carluon, using her power to give his sword the ability to slay Gerxel, and Carluon toppled the Zoan empire. Gerxel fled into Mt. Cielo after this, though Carluon and Yutona chased him down and killed him.[16] 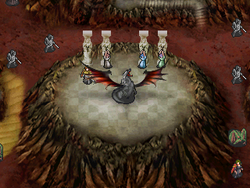 After several generations, the terror of Gerxel faded into history, with the only proof that the events transpired was some of Yutona's descendants inheriting the ability to transform into dragons as well as a small sect of Zoans that continue to adhere to Kalbazan's edicts.

Guenchaos, after years of watching his beloved wife, in the form of Kranion, be assaulted by warriors across the continent, eventually comes to the conclusion to revive Gerxel and purge the world of the humans that caused such suffering. He is briefly successful, offering himself and the four priestesses, Enteh, Katri, Tia, and Neyfa, as sacrifices. Gerxel is briefly revived at reduced power, due to Tia managing to avoid being killed during the ritual thanks to the interference of her lover Richard.

Gerxel, rendered immobile by his lack of power, is assaulted by Runan, Holmes, Tia, and Sennet who wield the four remaining fragments of Carluon's sword. Despite Gerxel's gloating that their blood and sword are too diluted to defeat him, the four successfully slay Gerxel once again.

The Gerxel formerly known as Kalbazan appears as the final boss of TearRing Saga: Yutona Heroes War Chronicles. He is revived by Guenchaos when the four priestesses descended from Yutona; Enteh, Katri, Tia, and Neyfa are sacrificed.[18] These sacrifices restore Gerxel's power with the blood of Miradona, which has been passed down through Yutona's bloodline.

Gerxel can only be killed when he is surrounded by Runan, Holmes, Tia and Sennet. When this formation is achieved one of them must land a killing blow on Gerxel with one of the four holy swords: Holy Sword Canaan, Holy Sword Leda, Holy Sword Reeve or Holy Sword Salia. If he is "killed" by other means his HP will simply regenerate.

It should be noted that Gerxel must be killed before turn 20. If he is not killed before then he will cast his Black Rain spell and kill every unit on the map sans himself and Tia, causing an instant Game Over.

Kalbazan held immense hate of the settlers from Jugd for destroying his fellow Zoans. This hatred fueled his violent tendencies with his transformation into Gerxel. Prior to this, the Zoan religion was relatively, if xenophobic, peaceful.[19] Gerxel's influence made the Zoan religion into a more violent one, with him demanding sacrifices and even more fierce xenophobia after the war between the Jugdi and Zoans.