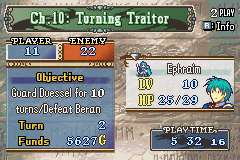 The status menu in The Sacred Stones explains a chapter's objective.

The first objective the series offered, and an extremely common one since, is seizing: the aim being to have the player's main character arrive at a certain point on the map and end the chapter by selecting the Seize command once standing on top of it. In the majority of games, seize points are thrones in the heart of a castle/fort in interior maps, or the gates of a castle/fort in exterior maps, although Fire Emblem: Path of Radiance, Radiant Dawn, and the prologue maps of Shadow Dragon vary this by having seize points be a space of otherwise innocuous terrain which happens to be marked by a blue glow (Tellius) or yellow glow (Shadow Dragon). Seize points are almost always occupied by the chapter's boss, requiring that the player's army defeat them before the lord can move in to seize; this task is made more daunting by how seize points give their occupier defensive, resistance, and avoidance boosts and heal the occupier at the beginning of their turn.

In Fire Emblem: Path of Radiance and Fire Emblem: Radiant Dawn, there is a similar objective called "Arrive", which is identical to seize except that any character can do so, rather than only the player army's commander. There are a number of minor variations on the arrive objective where a specific character is required to do the arriving; for example, Part I, Chapter 2's arrive point must be arrived at by the playable character Laura, and the Part III, Prologue's goal is to have Skrimir, a NPC character whom the player does not control at all, to arrive at the arrive point.

In Fire Emblem Fates, similar to the earlier "Arrive" objective, any character can seize.

Seize objectives are the only objectives in Mystery of the Emblem and Genealogy of the Holy War; the latter uniquely requires that multiple castles be successively seized in the same chapter, with each castle seized opening the way to seize the next until the player's army reaches the map's final castle. Also, it is the only objective in The Binding Blade, with the exception of the Endgame and the trial maps, and the only one in Shadow Dragon & the Blade of Light and its remake, Shadow Dragon, with the exception of the Endgame, as well as the multiplayer maps in the latter.

This objective simply requires that every enemy unit currently on the map be defeated in order to clear the chapter. If reinforcements appear, they must also be defeated.

With the exceptions of the battles against the Brigand Boss, Barth*, Rudolf, Duma, and the Creation, rout objectives are the only objectives in Fire Emblem Gaiden and its remake, Shadows of Valentia. Additionally, all skirmish situations also have a rout objective.

Worded as "defeat the enemy commander" in Shadows of Valentia and Three Houses, this objective is effectively a typical seize objective minus one step: the goal is simply to kill the enemy boss, and doing so automatically ends the chapter. This objective does not require that all other enemies be defeated as well.

In Fire Emblem: Three Houses, Chapter 16 of non-Crimson Flower routes and Chapter 17 of the Azure Moon and Verdant Wind routes have multiple enemies that are classed as bosses, and the objective is expanded to "defeat all enemy commanders." These otherwise function the same way as other "defeat the boss" chapters.

Defensive objectives were introduced to the main series in Fire Emblem: Thracia 776, and were relatively common until games after Radiant Dawn did not continue to include them. The player is tasked with enduring an enemy siege for a set number of turns (often between 7 and 15 turns), and the emphasis is on maintaining the defenses of their location to avoid being overwhelmed and defeated, rather than taking an active offensive against the enemy (though in most cases, doing so is certainly possible). The goal is focused around defending either a throne or gate which the enemy is attempting to claim, or defending weak NPC units who cannot fight back; should the enemy claim the seize point or kill the NPC in question, the map is failed and the player gets a Game Over. Some defense maps can also be won prematurely by defeating the chapter boss; these maps are marked with an asterisk (*) in the list below. In addition, all defense maps in Three Houses and Heroes are automatically won if the player successfully routs the enemy.

The following maps are defensive maps:

Defending as a requirement was first introduced in Fire Emblem: Genealogy of the Holy War, where in every chapter, the enemy could seize the player's home castle, causing a Game Over. Survival as the main objective appeared in Fire Emblem: Archanea Saga, where every episode required the player to keep one or two designated units alive for the full broadcast; in the bonus chapters remade for New Mystery of the Emblem, however, the objectives were changed and none remained as defense.

In Thracia 776 only, escape maps have an additional mechanic: any player unit who does not leave from the escape tile before Leif will be considered captured and removed from the player's party. As with all captured units, the player has an opportunity to get these units back in Chapter 21x, or Chapter 11x if they were captured in Chapter 11.

Occasionally, individual chapters in a game may have an entirely unique objective that does not appear elsewhere in the series.