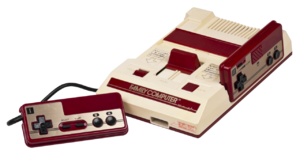 The Family Computer (Japanese: ファミリーコンピュータ Family Computer), known as the Famicom ファミコン Famicom) for short, is an 8-bit gaming system manufactured by Nintendo. The Fire Emblem series debuted on the system, which started a long running franchise of games. The system was released in Japan in 1983. It was rebranded as the Nintendo Entertainment System overseas, and was released the Americas in 1985, 1986 in most of Europe, and 1987 in the rest of Europe and Australia. It was succeeded in 1990 by the Super Famicom.